Book Review - The Art and Mystery of Brewing in Ontario 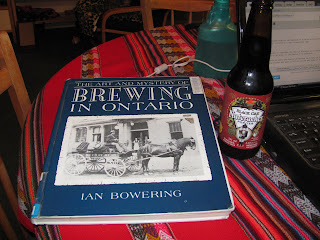 A few weeks ago I borrowed The Art and Mystery of Brewing in Ontario from the Toronto Public Library. I found it a very interesting read.

I was supposed to return it yesterday but had not yet finished it. I could not renew it as somebody else had it on hold. To that person, I do apologize.

The book really should be named The History of Brewing in Ontario as it is mainly a look back at brewing through the ages in all the cities and towns of Ontario.

The Canadian thirst for beer is legendary. A national pastime with the same associations as camping, sports, patio weekends and college festivities, a tall foamy beer is just something most Canadians feel passionate about. In The Art and Mystery of Brewing in Ontario, Ian Bowering examines the history of beer production and lore. The book includes a series of anecdotes and brewlore from people continuing to make this province's beer some of the best and most popular in the world. Beer aficionados will love this amusingly written account of the past 200 years of brewing in Ontario.

The book talks about brewing then goes in alphabetical order of city or town and the breweries which existed in each. Surprising today but when you think back to the 1800s when transportation was an issue, it is no wonder every city or town had one or more breweries.

Mr Bowering is a professional historian with a Masters of Museology and History from the University of Toronto. The thesis he did was on brewing in the 19th century in Toro 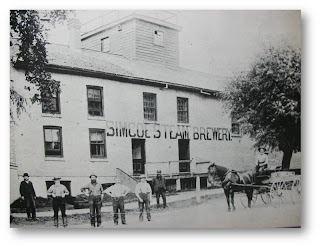 nto. Not only is he an expert but also a good writer. I have to love this guy too as the notes at the back say he is a fencer!

I especially enjoyed some of the ads that the breweries did back in the 1800s. Now I do believe that beer is not an unhealthy drink if drank in moderation and made all natural like craft breweries do (I have no idea what chemicals the big breweries use so they may not have the same claim). The ads promoting the "medicinal" properties of beer is hysterical.

Here are a few:

From a 1911 ad for Grants Spring Brewery Ale ... It gratifies the taste, Refreshes the body, Builds bone and sinew. Never knew beer was good for bones and never worried about my sinew before."

From Portsmouth Brewery 1857-1916 ... Recommended by most prominent physicians for invalids....natures own tonic.

Prescott Brewery from an 1859 Prescott newspaper ... perfectly pure and posse 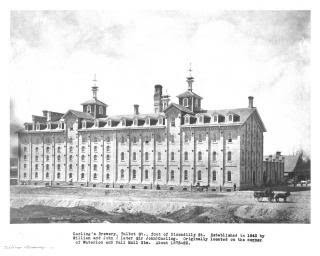 ss the fine tonic properties in a high degree. The Medical Faculty have given their strongest testimony in favour of the above and highly recommend their use to ladies and invalids.

Thunder Bay Brewery 1913 ad ... It would be worth a dollars worth of medicine to you, ask any doctor if there is anything more healthy than a good beer.

I can't give away any more. The book also has interesting stats such as in 1909 the O'Keefe Brewery paid its brewer an annual salary of $500 and his accountant $1,000. Too funny!

Ian Bowering wrote this book back in 1989 and much has changed since then with the amalgamation of big breweries that originated in Ontario and the closing of Northern Breweries and Formosa. I enjoyed the old pictures as much as the histories of all these small forgotten breweries and there are a lot of great pictures, many from the 1800s (right is Carling brewery in London circa 1879; left is Simcoe Steam Brewery in Barrie circa 1890).

How good of a book is this?

It is being returned tomorrow, the fine paid and I'm going to order my own personal copy. That's how good it is.

visiting via The Book Mind Set.

I am one of those few none beer drinkers, though this does sound like a good book. Thanks for the very tempting review.