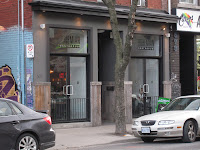 A new place opened up on Queen Street that Teena and I were looking forward to trying, The Bohemian Gastropub.

When we walked in and sat down, we were immediately greeted by our server, who provided us with a menu and took our drink order. We had a table by the window great for people watching, which we like to do.

Our drinks came right away but were had not yet decided what to order. Then our server disappeared and forgot about us. 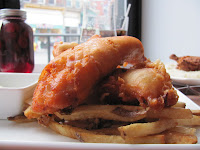 The Bohemian Gastropub has a very good selection of craft beers on tap. The problem after the first round was finding our server to order another. We were starving and had told our server that but it took him forever to come back to take our order.

Teena had Southern Fried Buttermilk Chicken with Mashed Potatoes. I ordered the fish and chips which I was looking forward to as the fish was trout. I had never had trout fish and chips before.

ut and it was one small chicken breast sitting on mashed potatoes spread around the plate. For $16, I would think there should be 2 breasts. She said the batter was tasteless.

My fish was a disappointment. The chips come already lightly salted and were quite good. The fish batter was bland and the fish soggy and tasteless. I decided some salt might help bu 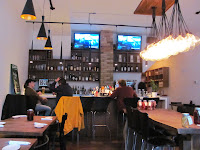 t none of the tables had salt, which I had to chase the server for. It came in a bottle with a small wooden spoon which was interesting.

Definitely not worth the $16 it cost.

I found the beer to be a very reasonable priced, though. Most pints were just $6 with some premium pints pouring for $7.

I would stop in and sit at the bar for a drink but would not order food again ... or sit a table and wait for a server.
Posted by Swordsman at 18:11