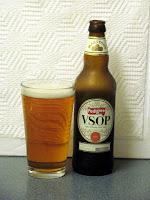 I have a great fondness for English ales and whenever I find a new one on the shelf of the LCBO, I pick it up. This week I found Marston's Pedigree V.S.O.P. (Very Special Old Pale) and, of course, brought a couple home.

The history of Marston's goes back to its founding by John Marston establishing J. Marston & Son back in 1834. In 1898, Marston & Son Ltd. amalgamated with John Thompson & Son Ltd. and moved to Albion Brewery in Burton on the Trent, where the brewery still operates. In 1999, Marston was taken over by Wolverhampton & Dudley Breweries (W&DB).

to reflect the fact that in recent years the company had become a national business, as demonstrated by the growth of the Marston's brands and the acquisition and development of the pub estate across the country. The change of name also represented an opportunity to emphasise the company's tradition, heritage and values, and to better promote our pubs across the country.

Pedigree and Pedigree V.S.O.P are brewed at Marston's Burton-Upon-Trent Brewery using an extremely old system called the Burton Union System. Burton on the Trent is home to seven breweries due mainly to the quality of the water which is drawn from boreholes drilled into the ground water.

Marston is the only brewery in the world which still uses the Burton Union System. I have done a fair bit a research into what these systems are but the best explanation comes from the Marston website.

Double rows of large wooden casks, made from European oak, are mounted on a frame, with a long trough running above. There are usually 24 union casks in a Burton Union set. Each cask can hold around 150 gallons. 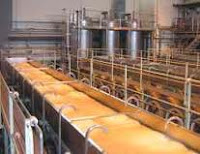 The Burton Unions are used to ferment Pedigree™ and to generate Pedigree's™ very special yeast for subsequent brews. The special yeast does not separate easily from the beer, meaning it's difficult to crop for the next brew using a conventional brewing method. In a Union, the yeast is trapped on troughs and easy to recover.

The process is expensive and complicated, but it is reliable. It's the only way of guaranteeing that Marston's™ achieves a crop of our special yeast for following brews.

A very short 30 second video of the Burton Union System in action is below.

V.S.O.P. is aged for 5 weeks and dry hopped (hops added at the end of the brew to brin

g out a hoppy aroma in the beer) with Worcestershire Goldings, a finishing hop used for its refined gentle, fragrant and pleasant flowery tones. A unique feature of this beer is that brandy soaked oak chips are added while the beer conditions.

The beer pours amber in colour with a white head which disappears rather quickly. Lacings do remain on the glass when sipped. I can detect hops in the aroma.

Surprisingly, the beer starts off with a slight sweetness with the bitterness of the hops coming in the finish. It is not a heavy bitter finish but a very pleasant hop finish. Even though it comes in with a 6.2% APV, I cannot detect any alcohol in the taste, nor that alcohol burn.

All in all, this is a very nice beer. I notice that the regular Marston Pedigree is available at the LCBO. Have to give it a try. Likely will come home with some more V.S.O.P too.