Book - The Astonishing General: The Life and Legacy of Sir Isaac Brock

I have read many, many books on the war and now try to focus on individual battles or the personalities involved. With the 200th anniversary of the war fast approaching, many new books are being made available.

When I saw a new book on one of the great heroes of the war, Sir Isaac Brock, I had to read it.

The Astonishing General: The Life and Legacy of Sir Isaac Brock is about "Major General Sir Isaac Brock (1769 - 13 October 1812). It tells of his life, his career and legacy, particularly in the Canadas, and of the context within which he lived. One of the most enduring legacies of the War of 1812 on both the United States and Canadian sides was the creation of heroes and heroines. The earliest of those heroic individuals was Isaac Brock who in some ways was the most unlikely of heroes. For one thing, he was admired by his American foes almost as much as by his own people. Even more striking is how a British general whose military role in that two-and-a-half-year war lasted less than five months became the best known hero and one revered far and wide. Wesley B. Turner finds this outcome astonishing and approaches the subject from that point of view."

I have had problems finding a decent book on Isaac Brock and this book filled that need well. It told me things of the man and the Battle of Queenston Hei 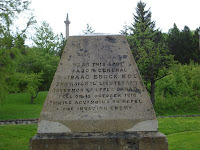 ghts, where Brock lost his life, that I did not know before.

I found the writing of that battle plus Brock's meeting with Tecumseh and the taking of Detroit a little dry. When Tecumseh met Brock and they discussed the upcoming campaign to take Fort Detroit, Tecumseh, considered "the Wellington of the Indians", was frustrated with the British officers he had to deal with up to that point. He considered them meek and womanlike but was so impressed with Brock that he presented Brock to the hundreds of his warriors gathered and declared loudly, ""This is a man!" I thought Turner could have been more profound in his writing of this meeting.

Also I was disappointed in the description of Brock's involvement in the Battle of Alkmaar in Holland. The author dedicated just a paragraph to this battle where Brock was wounded in the throat by a spent musket ball. Later Brock wrote of the incident, "I got knocked down shortly after the enemy began to retreat, but never quitted [sic] the field, and returned to my duty in less than half an hour." I thought this battle could have been expanded on.

That being said, it is an excellent book of the life of the General. I particularly enjoyed the last chapter, "The making of a hero: reflections on Brock", where the author puts together the reasons that even though Brock was killed while leading a failed charge on the heights in a battle early in a war w

hich continued for another 3 years, he was considered the savior of Upper Canada. It was very interesting.

I also liked how the author included some of his speeches to the legislature and a list of Brock's possessions at the time of his death. Brock loved to entertain and it shows in the amount of alcohol he had amassed even though he drank very little.

One final point of interest I discovered in the book was that Brock never sat for a portrait of himself, so all paintings of the general come from descriptions of those who had met him. I knew this of Tecumseh but not of Brock. This doubly makes paintings and drawings of Brock's meeting with Tecumseh quite fanciful.

I found this an interesting book and would recommend it to anyone interested in the War of 1812.
Posted by Swordsman at 12:40