"Cat on a Hot Tin Roof" at the Shaw Festival 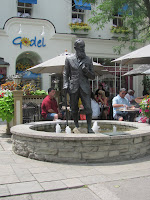 Six years ago Teena and I saw Cat on a Hot Tin Roof in Stratford.

We both enjoyed it. In fact, I could claim that it is my favorite all time play. When we saw it was coming to the Shaw Festival in Niagara on the Lake, it was a must see.

“WHAT IS THE VICTORY OF THE CAT ON A HOT TIN ROOF? JUST STAYING ON IT, I GUESS, AS LONG AS SHE CAN.”

"Maggie and Brick’s marriage is on the rocks and Brick is drinking as much as he can to quiet his thoughts and forget about his past. But Big Daddy’s inheritance is at stake and his two sons and their wives fight to win their share. An explosive drama and a Pulitzer Prize-winning play. 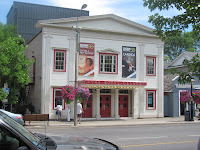 “The introduction of any Tennessee Williams play into a season provides an immediate shift in temperature. In this play the emotional and literal heat rises even further as the now iconic characters wrestle and struggle for power, sex, respect and maybe, somewhere, love.”

The play was at the Royal George Theatre on Queen Street in the middle of town. It is a nice old theater built as a vaudeville house back in World War 1 to entertain the troops training there. A statue of Mr Shaw sits across the street from the theater in a fountain

This production was every bit as good as the one I saw before. Moya O’Connell who played Maggie w 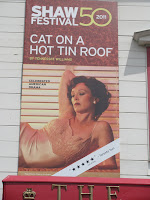 as terrific and Jim Mezon as Big Daddy was so full of rage and passion it was mesmerizing. There were no weak performances in this production, which runs 3 hours long with 2 intermissions, and the play never drags. I thoroughly loved it.

If you like theater, this is a must see production!
Posted by Swordsman at 17:06