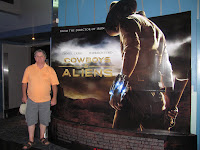 When I first saw the preview for Cowboys and Aliens, I thought the premise was dumb. How bad would this movie be? The thing is, the more previews I saw, the more I fell in love with the idea. So I wanted to see it the moment it opened.

1873. Arizona Territory. A stranger with no memory of his past stumbles into the hard desert town of Absolution. The only hint to his history is a mysterious shackle that encircles one wrist. What he discovers is that the people of Absolution don't welcome strangers, and nobody makes a move on its streets unless ordered to do so by the iron-fisted Colonel Dolarhyde. It's a town that lives in fear.

But Absolution is about to experience fear it can scarcely comprehend as the desolate city is attacked by marauders from the sky. Now, the stranger they rejected is their only hope for salvation. United against a common enemy, they will prepare for an epic showdown for survival. 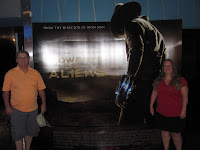 Yes, everything I was looking forward to in this movie was there. I was hoping it wouldn't be campy and it wasn't. Combine the best of a western with the best of Sci-fi and you have this movie. The characters are well done with some good background stories.

It was funny, action packed and never dragged.

Definitely worth seeing.
Posted by Swordsman at 14:42