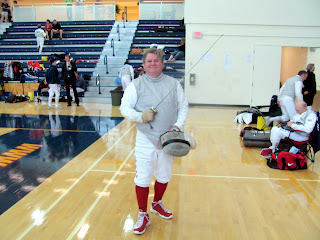 Today is day 1 of 2 days of fencing in Kingston in the first annual Can/Am Veterans Cup.

133 people came to fence. Some fenced just their own weapon, some chose to fence 2 weapons, plus there were awards, one for men, one for woman, for those who did the best in fencing all three weapons.

Yes, I am entered in all three.

Many came up from the U.S., a group came from Ottawa and couple came from out west but Albert, who is pictured with me on the right, came all the way from Hong Kong. He was coming over on business, saw the Can/Am Veterans Cup and made some changes to his schedule so he could fit it in. He was a very nice extremely friendly guy. He sat by me and we chatt ed quite a bit during the day.

My day at foil started bad as I lost my first 2 bouts, both by 5-0 scores. Not my weapon I guessed and was now figuring on a last place finish.

Then I fenced my friend, Gaby, and things clicked into place in my brain. I lost but only by a 5-3 score. Then I scored 2 in my next loss. In my last match, we were close and I changed to a more sabre style of attack off the line and hey, I won! 5-4.

That ranked me 23rd out of 27 fencers. Then came my direct elimination against Dave from our club who finished ranked 10th and he had his way with me in the match.