Detroit NAC Over 40 Men's Sabre - Getting the Rust off 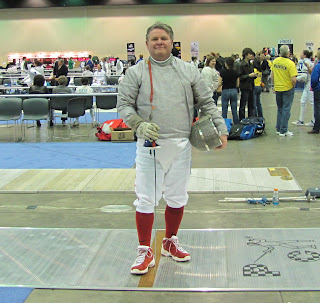 Today I fenced in my first event at the Detroit North American Cup (NAC), Over 40 Men's Sabre. Forty-six were entered and, being now, 57 years old, many were much younger.

I was further burdened by an elbow injury. It is coming along OK but since the beginning of January, I have only practiced a handful of times. Combine that with a bit of a sulk ("hell, it I can't fence, no since even going to the gym to do cardio") and the recipe was in for a bad finish today.

When I arrived at venue, it was fun to see all the usual participants. When I fence the vet division in Canada, there are only usually a handful of competitors. For today's event, there was 46. I was quickly invited to join in the warm-up session.

I must say, the first two or three matches set my elbow on fire. As I expected, though, when I fenced through it, the pain subsided and really the elbow was not much of an issue for the rest of the day. Wel,l during the competition anyways. It's pretty sore now.

My first match of the day was against Minton and I lost 5-3. Not bad really. I usually start slow and he was a very good fencer who I managed to keep up with. I won my next match 5-2 against someone I should be able to beat anyways. Still it felt good.

My next two matches were against excellent fencers. Paragamo was first and is ranked 7th overall on this circuit. I was up 4-3 but lost 5-4. For the last point, I stepped in intending on blocking his attack, then striking him for the point (parry-repost). Instead my arm came straight out as an attack and he got the point. Great strategy, poor execution.

Sbarbaro was next. Same result. I was up 4-3 and lost 5-4 and, yes, lost on the same move. I have a strategy for that move that works but, hey, I thought about it about 10 minutes later. That's what a lay-off can do for you.

I then lost to someone I really should have beaten and, for my final match of the pool, lost 5-2 to a great fencer.

In my first ... and only elimination match, I plainly did not fence well, think well, or execute well. My day was over and I did not even finish in the top 32. Been a long time since that happened.

The day was good for me. I wondered for awhile if I would even be able to attend this event and I did and did not fence too badly.

Now ... to ice up the elbow and get ready for tomorrow's event, the men's sabre 50 -59 age division. Hopefully a better result.
Posted by Swordsman at 19:19