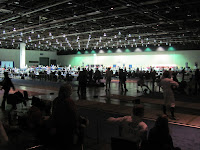 Today was day 2 of the NAC and I was fencing, bright and early, in the Men's Sabre for the 50 to 59 age group.

It was an early morning. Check in closed at 8AM. I left a wake-up call at the front desk for 6AM but the call came at 5:45. I could have used those extra few minutes sleep.

I woke up pleased that my elbow and arm felt pretty good. The problem was I did feel sluggish once I had geared up. After about 20 minutes of warm up bouts, though, I was feeling pretty good about my game.

Then it started for real. I lost my first bout 5-4 and my next 5-3. It went downhill from there. In the end, my record was a winless oh for five. That's oh as in ooh no!

There were two in my pool I could beat on any other day, the first person I faced and the last person. One other that I fenced well against in my second match, I could beat if i was really on my game. That was not today. My hope was to fence well in my first elimination match to move up my ranking.

Then it was time for the break and for the bout committee to organize the direct elimination matches (DEs). This usually takes about 15 minutes; however, the power suddenly went out. The lights died and the emergency lighting came on right away. It was funny how a room the size of a football field, noisy with beeping scoring machines and the clanging of blades meeting, can suddenly become so silent. It took about 15 minutes for the lights to come back.

During this time, I felt my arm start to tighten up. I did my best to keep it stretched out but it insisted on not loosening up. After about 40 minutes, it was time to fence and I was up 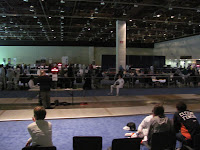 against the 9th ranked fencer.

To my delight, he loved to back up and play a defensive game. This works to my strength, my attack, and my attack was working excellently this weekend. I don't like to make excuses but my arm was still very stiff and when I attacked, there was pain and worse, no arm speed. He could easily parry me (block my attack with his blade) and then strike to score a point (called parry/repost) At the break, to my horror, I was down 5-0.

My arm started to loosen up and my attacks began to land in the second half but it was far too late. I was knocked out by a score of 10 - 3 and the lights were out for me. I finished the day 24th in a field of 26.

On the good side, my footwork was excellent and my attacks ne'er unstoppable. I was also good off the line yesterday and the first half of today, scoring many points in that fashion or getting a simultaneous hit, where neither fencer gets awarded a point.

What needs work? My defence. Looking to concentrate on that quite a bit in practice.

As always I enjoy the week-end at the NAC. This weekend was no exception. Now to prepare for the Can/Am Veterans Cup in Kingston in May.
Posted by Swordsman at 19:05