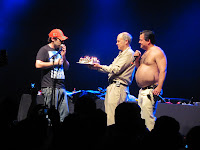 Teena managed to get some free tickets for East Coast Night Music at the Sound Academy, which overlooks the city from the east side of Toronto harbour.

We are fans of the Trailer Park Boys and Randy and Trailer Park Supervisor, Jim Lahey, hosted with Ashley MacIsaac being the musical guest.

I went for Ashley and figured Randy and Mr Lahey, although they toured with their own show, would share equal time with the great fiddle player from Cape Breton. I was wrong.

What I was right about, however, was Mr Lahey and Randy had about 5 minutes of great material and then it went downhill fast. I could think of many ways to make the show more clever but basically it was cheap, easy "butt" jokes. The crowd did seem to enjoy it for the most part, though. The liquor may have helped.

After a 15 minute break ,Ashley MacIsaac came on. Today is his 36th birthday. For his first song, the background music of the DJ drowned his fiddle playing out. They then got 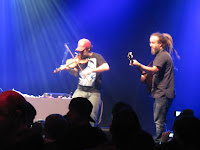 that in order and he was great. He brought out an old friend of his with an acoustic guitar and they played some great tunes together.

Then Mr Lahey came out with a birthday cake, everyone sang Happy Birthday and Ashley's set was over. He was on for about 20 minutes. What the hell was up with that?

Ashley and his friend left the stage and we left the building.

In many ways, a disappointing evening. The company was good, as always, and tall cans of Amsterdam Big Wheel were $6.25 and we got in for free. You also know we did not have a really good time as we did not take any pictures of each other and together, enjoying ourselves at the event.

Tonight did gave me a chance to go outside to pick my spot on the deck to spend a hot afternoon with Teena, having some beers while over looking the city. I am so looking forward to that! 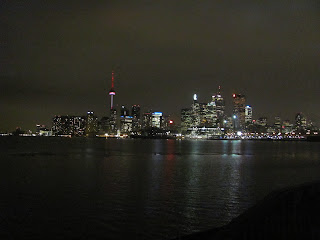 Toronto at night from the huge outdoor patio
Posted by Swordsman at 21:36