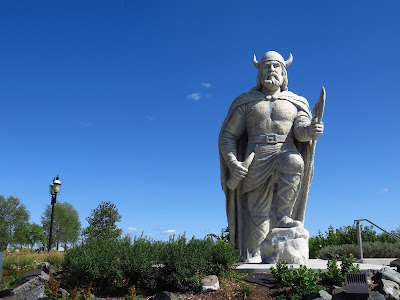 Today Teena and I landed in Winnipeg, rented a car and drove to Gimli which is a little over an hour north of the city. It's a picturesque town on the shores of Lake Winnipeg. 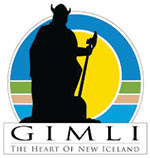 One thousand Icelanders made in 1875 to settle the area. New Iceland took up 58 km of the Lake Winnipeg shore with Gimli being its first settlement. A monument in Viking Park explains the name Gimli came from Voluspa, an Ancient prophecy from the writings of the Elder Edda. A hall more fair than the sun, thatched with gold, where people shall dwell in happiness forever. 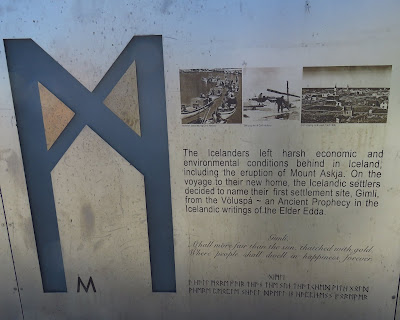 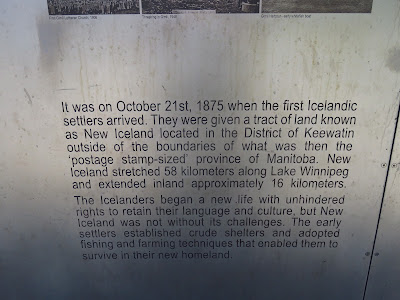 This statue in Viking Park is 4.6 metres (15 ft) high. Of course, we had to have our picture taken with it. 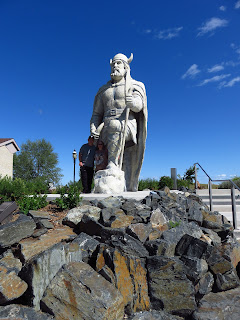 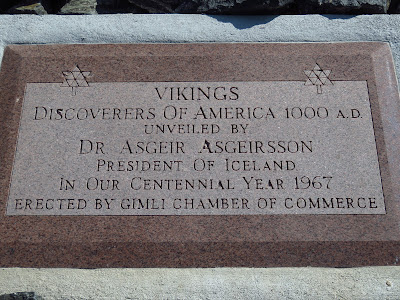 Some sites around the park and harbour. 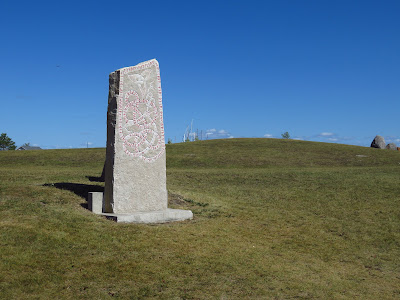 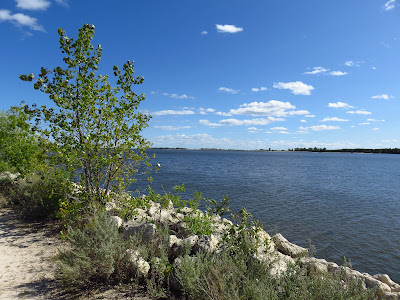 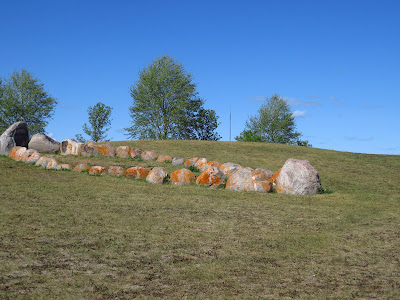 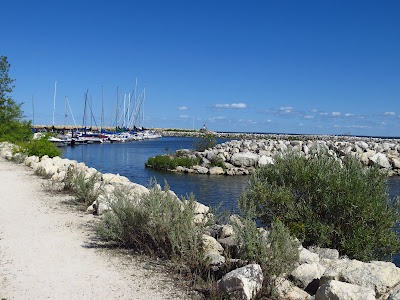 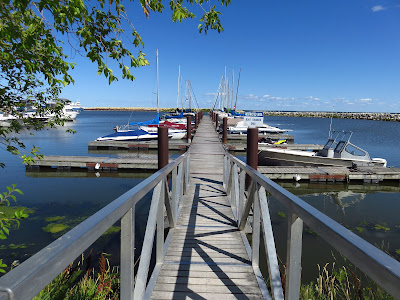 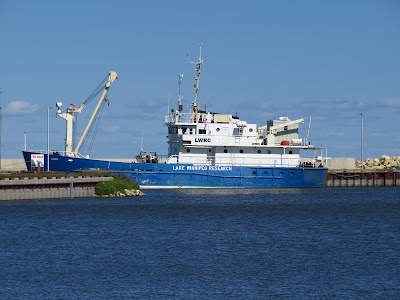 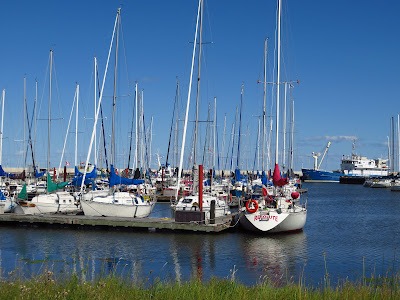 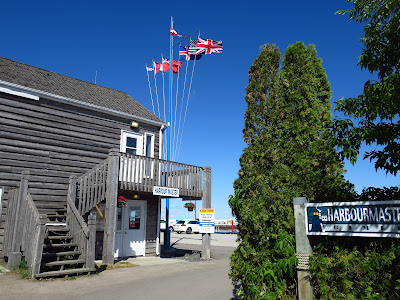 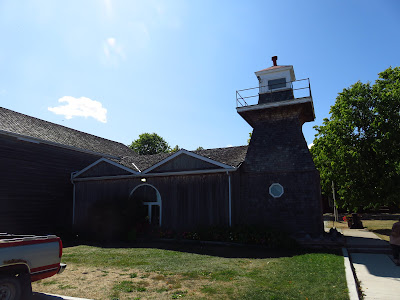 The beach. There were people in the water which I imagine would be a little on the frigid side. I find Lake Ontario to the south of us cold! 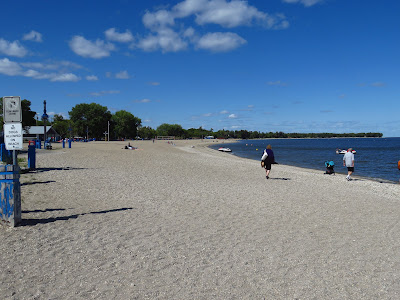 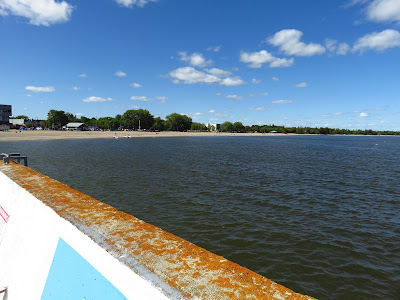 The sea wall features paintings along the sea wall which were done or redone by local artists. Each one has the date on it going back 25 or more years. 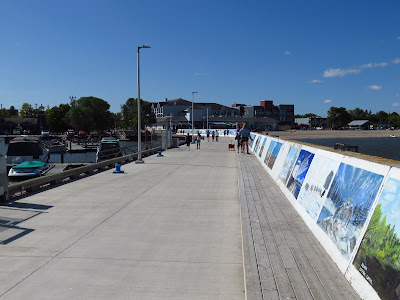 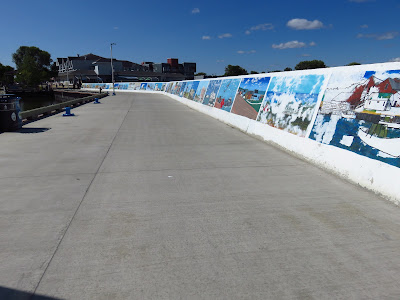 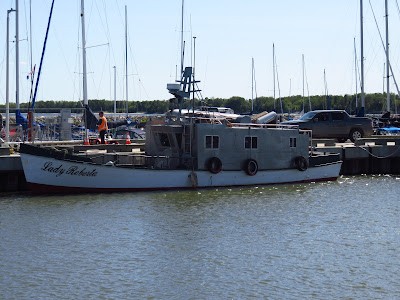 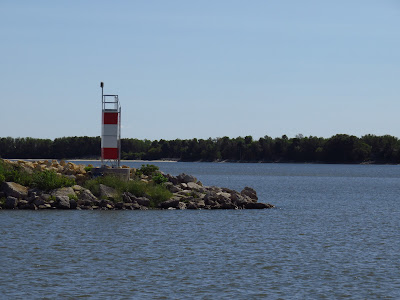 Teena and I ate at Seagulls. I had fresh caught pickerel for the first time and loved it. 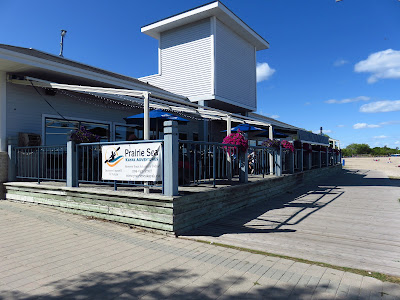 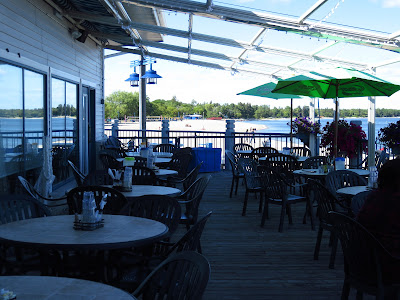 Gimli was the site of an RCAF base. Here is the CFB Gimli Memorial. This aircraft monument in Gimli was presented by the officers and men of Canadian Forces Base Gimli to commemorate years of friendship and cooperation during operations of the base between 1943 and 1971. The plane, a T-33 Silver Star (later designated CT-133), was brought into town on 29 June 1971. 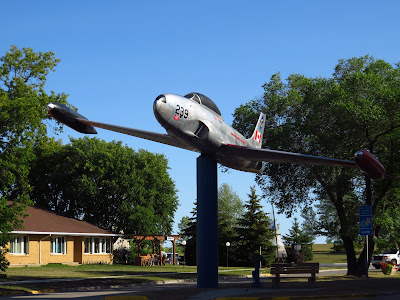 “The Manitoba Purple Martin Club welcomes you to the South Eastern Purple Martin Capital of Manitoba,” says the sign at the foot of a tower boasting more than two dozen birdhouses. “Purple martins need your help. We need yours.” Apparently the gorgeous bird, Canada’s largest species of swallow, relies on housing provided by humans during breeding season. They like to be in open areas near water and build nests inside the wooden birdhouses. In return for getting to safely breed in condo-style birdhouses like this one in Gimli, purple martins eat hundreds of insects a day and so help with pest management. 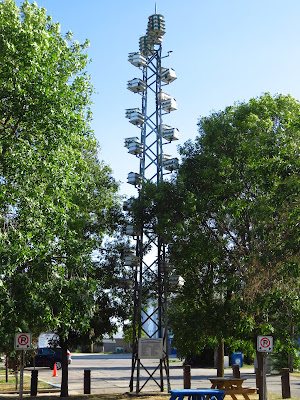 We had a very enjoyable time in Gimli. If you travel to Winnipeg, the town and museum is definitely worth the trip.
Posted by Swordsman at 19:00