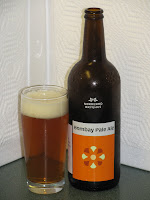 There was quite a buzz in the Beer Geek community about Norrebro bringing some of their beers to the LCBO. The Bar Towel has quite an extensive discussion of the different beers in one of their string.

Sadly when I hit the liquor store to get some, only the Bombay Pale Ale was left. I wanted to try a few for this post.

The brewery was opened in 2003 in Copenhagen as a brewery and restaurant. It was the vision of ex-Carlsberg brewmaster Anders Kissmeyer (pictured right). In 2000, he was working with Carlsberg and then came with the idea that he wanted/needed to open his own operation and quit the company in march of 2001 to work full time on bringing the plan together.

He decided that "the optimal way of launching the product would be to combine the brewery with a restaurant. Not only would this give a direct exposure and direct contact with the customers, but it gave me the opportunity to realise another of my ambitions: to bring forward the combination of good crafted beer and a more modern kitchen than the traditional Danish beer kitchen."

In September 2003, the doors of the brewery restaurant opened.

The beer philosophy of the company is explained on the website by Anders Kissmeyer as "First and foremost we seek variousness, that we at any given time can offer a varied selection of beer types and taste to our guests. We therefore cover sweet, sour, bitter, strong, mild and dry beer, so as to offer a beer for every taste and mood, and a beer that can accompany all of our dishes served in the restaurant".

I love his line, “Taste is at any time more important than following the rules of old beer culture.”

He has stuck to that ideal. In In May 2005, the 29th beer type brewed at Nørrebro Bryghus, was made. They do not say how many they have made to date.

It pours amber in colour with a decent head. It has a nice aroma with a hint of floral hops. It is not an overly hoppy beer to drink. The malt really comes to the front of the taste and in the finish. It is more malty than hoppy. Obviously it is a well-brewed beer but for my taste it really it is just an OK beer but not one I would go out and have again. To me, a pale ale should have a hop presence, which this one does not.

It would not stop me from trying many of their other brews if I had a chance. The brewery seems to have too good of a reputation not to.
Posted by Swordsman at 14:50