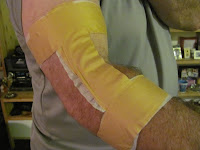 Last year I slightly hurt my elbow while fencing foil. I am actually a sabre fencer.

Although I could fence, there was some pain, which had mostly subsided by my last practice in early December. So I had a month off of rest where I did not stress my elbow at all, except for banging it against a wall while rounding a corner.

When I went to my first fencing practice on Thursday, I was surprised at how much it hurt when I landed an attack or banged blades with my opponent. So I went home and iced it, kept it wrapped and hit practice again on Monday night. Again severe pain, when I banged blades, so I retired early from practice.

Tonight I saw my physiotherapist, Lauren, and sure enough I have Lateral Epicondylitis, also know as tennis elbow.

The pain of tennis elbow occurs primarily where the tendons of your forearm muscles attach to the bony prominence on the outside of your elbow. Pain can also spread into your forearm and wrist. Specific inflammation is rarely present in the tendon but there is an increase in pain receptors in the area making the region extremely tender. Today nearly half of all tennis players will suffer from this disorder at some point. Interestingly though, tennis players actually account for less than 5 percent of all reported cases making the term for this condition something of a misnomer.

Lauren checked the area, did a fair bit of manual treatment and then ultrasoun

d. She has my elbow taped to give the damaged ligament some rest and support. She also gave me stretches to do twice a day. I see her again on Friday

Luckily there is only one fencing tournament in February and I have already written that one off. I want to be ready for the big Veteran NAC Tournaments March 13 and 14 in Detroit. Also the Provincials and Eastern championships are that month. I want to be healthy and ready.

No fooling around, I'm going to do exactly as Lauren says. That means no blade work at practice but will still go as I have so much other stuff I can work on to be ready.

Damn it, though. Not the start to the spring fencing season that I wanted.
Posted by Swordsman at 19:50

This was very much informational. I was looking to get Tennis Elbow Treatment In Phoenix. Thanks for sharing. Keep exploring.