Fencing at the Queens Invitational 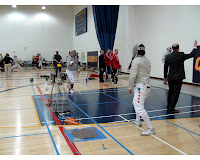 I headed down the 401 to Kingston to fence in the Men's Senior Sabre event (all ages) at the Queens Invitational.

Being the last event of the day, scheduled for a 2:30 registration close and a probable 3:00 start time, I fully expected everything to be late, which is usually the case. Kudos to the organizers as we started right on time. The tournament was very well run.

These are very challenging for me as 98% of the competitors are 35 years younger than I am. I am proud that if I fence someone with the same amount of experience, I usually win or lose hard.

This wasn't the case in my first match, however. I lost badly, 5-1 to someone I could usually take. As I watched him fence for the rest of the pool, I was dumbfounded that I lost to him. Just did not have my fencing brain turned on.

I lost my next 2 bouts and then won the next three, before having to take on one of the best fencers in the room. We started with a simultaneous hit, where we both strike at the same time, so close that the judge cannot make a call. After that, I went on the attack but he defended well, as I knew he could and he took all three points. 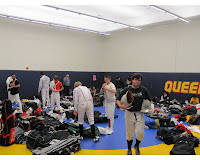 Then he did something that has not happened to me in 5 years of fencing ... he tried to show me up and embarrass me. When the judged said "Fence", instead of going into a fencing stance and attacking or defending, he just calmly walked backwards with his blade down, kind of "come on attack me anywhere, I can beat you" attitude. It pissed me off so I was very careful with my distance, making sure he could not counter attack and then exploded into my attack and got the point.

I was chuckling as I walked by the judge to my side of the strip and said to him, "That felt good", which made the judge grin too. I lost 5-1, but got satisfaction from that one point.

In the elimination round, I won 15-5 in my first match, and then had to take on my friend and club mate, Chacho. We used to always have close matches, and then for some reason, I started fencing him stupidly, whether in the gym or in a tournament. I seem to always try a beat attack, where I hit his blade, before striking him. It never works. Today was the same. I tried it and it failed. Tried again and it failed. 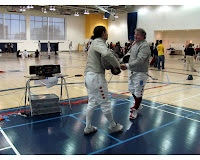 Then I said to myself, "Walk him down the strip and attack his side". What do I do, off the line try to hit his blade, miss, and he strikes me. At the break, he was ahead 8-2 and stood on his engarde line with his arms apart, yelling down, "What are you doing? Your doing the same thing every time and it's not working!"

"I know! My brain's not working! You wait! I'll be better in the second half"

I do have work to do in practice though.

A fellow fencer Kiah took some great shots of the match between Chacho and me. Thanks!

Me, in the red socks, launching an attack. 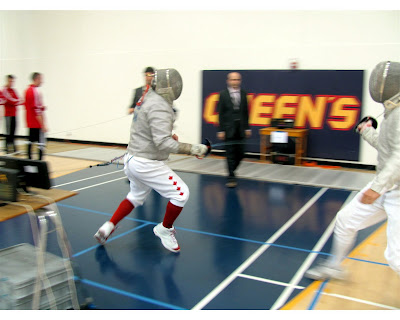 Chacho at the break, asking me "what the hell are you doing?!" 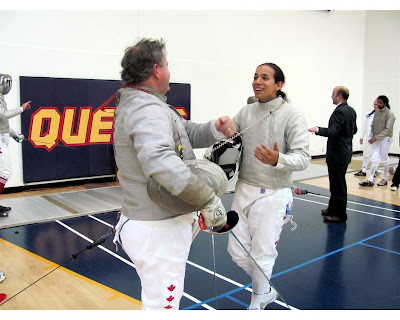 I block Chacho's attack but notice how his blade bends around to strike my arm. Damn! 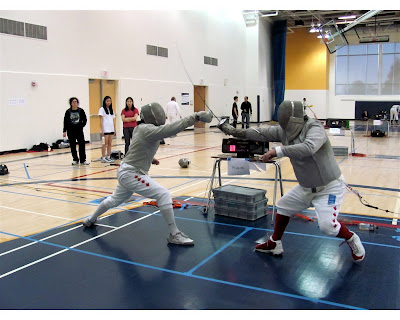