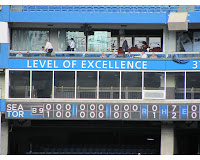 Today the Jays had an afternoon game against the Seattle Mariners. We had bought the tickets from a friend a couple of months ago. Problem was, we never paid attention to the start time. We just assumed it was a night game

At noon, I decided to check to see who was pitching and saw that it was a 12:37 start. Must be wrong on the website. Then I checked the ticket.

I phoned Teena who was out with a friend for lunch and told her. As I work close to the stadium, I got there on time. Unfortunately Teena had the car and had problems with the ticket machines in the parking area below and arrived in the 4th inning. 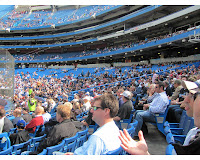 She missed the event.

In the first inning, Jose Bautista did what we all wanted him to do ... he hit a long high shot to left field that landed in the Jays' bullpen for his 50th home run. The first Toronto Blue Jay to hit 50!

Some notes on the shot. Bautista is only the 26th player in major league history to hit 50 home runs or more. He is the first player since 2007 to hit 50 or more. The home run moves him up to #36 in the single season home run list. Two more shots and he will be tied for 25th. It also was the 31rst home run at home breaking Carlos Delgado's Blue Jay record set in 2000. 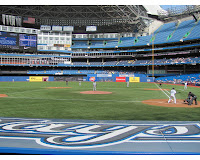 Being a weekday afternoon game, there were only 12,590. Yes, I got pictures and they are below, proof that I was one of small crowd on hand that saw the event. Too bad as he deserved a bigger audience. After all, the closest player to him in home runs this year is Albert Pujols from St Louis with 41.

The home run also had importance as it was the only run scored all day. Shawn Hill got the win for Toronto and Gregg came in for the save.

It was a beautiful day for baseball made better in that originally the afternoon was supposed to be spent at work. A half day holiday taken which was well worth it.

The swing that did it! 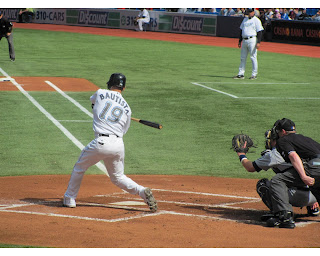 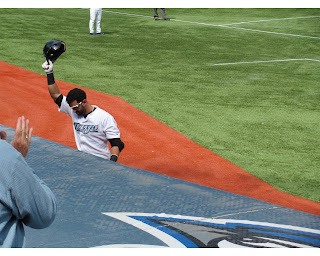 Dodging an inside fastball later in the game 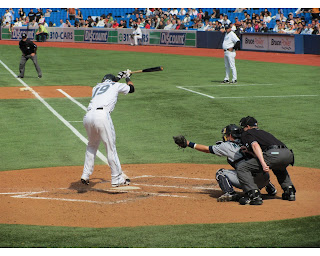 Likely our last game of the season and our chance to say goodbye to Cito. 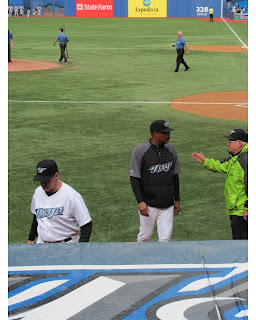 Guess who was interviewed after the game? 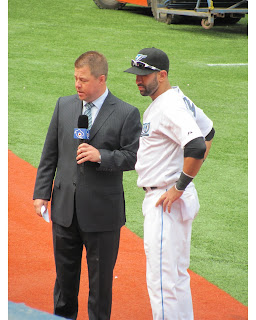