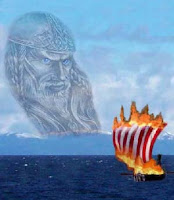 SEE THE WORLD'S LONGEST BRAT
AND AN ACTUAL VIKING FUNERAL AT THE DALLAS OKTOBERFEST ON SATURDAY, OCTOBER 2nd, 2010.

That's right, we are going to torch a viking ship on the pond!

Why? Because we sold the name "Viking" to some Icelanders. Now we need to come up with a new name for the brewery.

I had two beers from this brewery to try and when I first Googled Viking Brewing Company found this Texas company. I never saw any of their beer when I was there. Quite the coincidence though as my friend, Sara, had brought me back two beers from the Viking Brewery in Iceland, Thule and Viking Sterkur (Viking Strong), when she was there. It looks like after October 2nd, there will only be one Viking Brewery in the World.

Viking Brewery is a division of Vífilfell which is a large beverage conglomerate whose biggest product is Coca Cola. I couldn't find out too much else about the company or beer as everything I found was in Icelandic and had to undergo a loose, well very loose translation.

So, how did they taste? 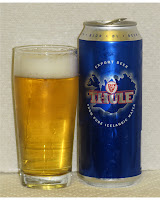 yellow or straw with a white head. The beer did leave lacings on the side of the glass meaning a good malt was used.

Although 5% APV the beer was very light tasting with only a hint of hoppiness. It is listed and an "Export Beer" so likely was brewed not to offend. It was a run of the mill big brewery style beer. Not much to it. 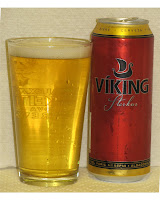 Viking Sterkur: Sterkur means strong in the Icelandic language, so at 7% APV was quite surprised when it poured the same colour and head as the Thule. Just shows that colour is no indicator. It did have more aroma than the Thule and a slight hop flavour through out, with a slightly hoppy finish. This was not a bad beer, not a great beer, but very drinkable.

So for my short tour of Icelandic beers, last week and this week, I would rank the four beers I had as follows:

The top two are just another reason to want to visit Iceland.

Thanks again, Sara, for hauling these back for me. They were fun to try.
Posted by Swordsman at 18:29