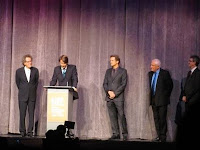 Based on the true story of the Queen of England's father and his remarkable friendship with maverick Australian speech therapist Lionel Logue. "The King's Speech" stars Academy Award nominee Colin Firth as King George VI, who unexpectedly becomes King when his brother Edward abdicates the throne. Academy Award Winner Geoffrey Rush stars as Logue, the man who helps the King find a voice with which to lead the nation into war.

Teena had free tickets given to her for the Gala, North American premiere of The King's Speech, which opened at Roy Thompson Hall. It is the first gala event Teena and I have 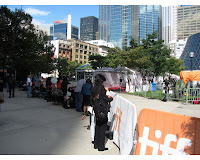 People lined up early to see the stars on the red carpet. I work in the building next to Roy Thompson and am always amazed by how the early crowds start to form. The picture to the right was taken three hours before the premiere and they had stood there a lot longer than that. The one at the bottom was taken when it was close to red carpet time.

The director, Tom Hooper, came up on stage and introduced the film, Colin Firth, Geoffrey Rush and the writer, David Seidler. He told a comical story of how Mr Seidler had written to the Queen's mother thirty years ago for permission to do the film. She said yes but only after she was gone as the m 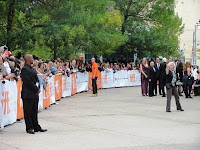 emories were still too painful. He agreed "not knowing the Queens mom would live to a hundred and two". Now many years later the film is done.

I did not know what to expect as the story could prove to be boring, but boring it was not. It is well-shot with humour and great acting. The period is shown very well along with the inside story of the King Georges VI family and King Edward's abdication.

I really enjoyed this movie and give it an 8/10. It is a movie worth paying for.
Posted by Swordsman at 21:17