Beer of the Week - Gaffel Kolsch 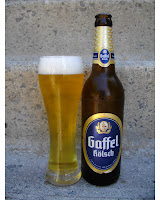 I saw a Kolsch beer on the Bar Towel when they published the list of LCBO limited summer releases. I have never had a Kolsch before and this would be my opportunity. So at lunch that day, off to the LCBO I went and picked myself up a couple of bottles of Gaffel Kolsch to try on the long weekend

I thought that before taking a sip, I should find out what style Kolsch is. German beers are mostly lagers and Kolsch is one of the few German ales brewed. According to the German Beer Institute, it is of of the palest German beers made and is Germany's only true, all-barley, pale ale.

After lagers swept through Germany and Europe, there were only two ales left in Germany. The Weissbiers (wheat beers) and the Kolsch, which was brewed in and around Cologne. There is a reason for this. In 1603, city officials in Cologne passed a law stating that only top fermented beers were allowed to be brewed in Cologne. The lager was outlawed.

Germany seems to be a stickler for beer laws. First they came out with the Reinheitsgebot, or German purity law, stating what exactly beer could be made from. Germany treated Kolsch no differently as in 1985 came the Kolsch Convention declaring that only breweries in 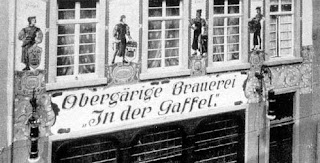 the Cologne metropolitan area legally could make a Kolsch style beer and defining the Kolsch style.

A Kolsch is made with just one kind of malt a pale Pils malt. It also must be pale in colour, top-fermented, hop-accented, filtered and be between 3 and 5.3% APV. They are also allowed a longer period of time to ferment or lager. It too must also follow the Reinheitsgebot. So many rules for one style of beer.

Gaffel, of course, is located in Cologne and opened its brewery in 1908 when two brothers bought out an old brewery which was established in 1888 in the building of an old 50 year old tavern. It survived the second world war and is now Germany's 10th largest keg producers as they sell only 30% of their brand by the bottle.

And I have two of them to empty.

From what I read, Kolsch should be drank from a narrow straight sided glass. My glass was narrow but with curves. It would have to do. The beer pours with a nice head and a golden colour. I was not expecting there to be a floral hoppiness to the aroma but there was.

This is a nice crisp t 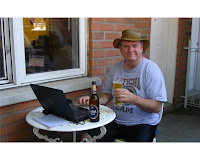 asting beer, which starts with a slight hoppy bite that remains throughout the finish. Where a golden lager finishes quickly, this one lingers pleasantly on. This is an ale that a lager drinker would appreciate.

I really liked this beer and the style. I also picked a great day to try it as this beer seems to cry out for a hot summers day. It's 28C and not a cloud in the sky as I sit out on the terrace and taste and write about this.

Time to go relax and try another.
Posted by Swordsman at 14:48

I just noticed the other week that the LCBO carries Koelsch. I visit Cologne about once a year for work, and I love this type of beer. It's perfect on a hot summer day. I only wish that, of the "big three" Koelsch producers, the LCBO was carrying Reissdorf or Frueh, since, in my opinion, both of these are much better.