From Beer to There - Glassware & Belgium Beer 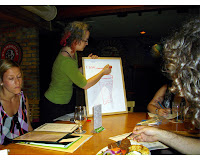 Tonight was my final class in the "From Beer to There" course put on by Harbourfront Centre and taught by Mirella Amato from Beerology.

This week was a session on glassware and Belgium-style beers, and was held at on of my favorite places in Toronto, C'est What.

The session on glassware was quite interesting and why certain shaped glasses help to compliment a style of beer. For instance, the size of the glass and the size of the rim both come into play. A tall narrow glass with a small rim opening would be used for lagers and pilsners to help concentrate the head to capture the lighter flavour, plus show off the golden colour of the beer.

A large glass with a wide opening would be used for an English ale, as the head is not that important here. Plus when you drink, you want a bigger volume to cover the mouth so it can enjoy all the complex flavours. 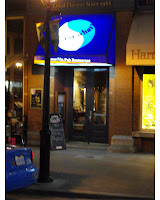 I have to go beer glass shopping and know which 3 glasses I want to buy ... well, maybe 4.

Then it was on to sampling. We started with a Belgium Wit from Mill Street Brewery. I could smell and taste the coriander and orange peel in the beer and taste some of the yeast character. It is a great beer, one which find itself in my fridge this summer.

Next up was another wheat beer, this time from Unibroue, an Ephemere, which too was fabulous. I am fast becoming a big fan of wheat beers, thanks to Mirella.

Next was a authentic Trappist beer, a Dubble from Chimay. Only 7 breweries have the Trappist Designation. It was 7% alcohol, cloudy, dark brown in colour and I could taste toffee in it as I sipped. Someone suggested they sensed bread in the taste but I did not get it. I do know I enjoyed this beer. 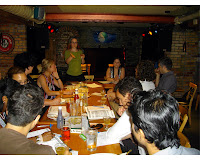 For the final beer of the night, and sadly of the course, was a Belgium-style trippel again from Unibroue called La Fin du Monde. It was loaded with flavour, I found it a little peppery, sour, carbonated and at 9%, could taste the alcohol. A fabulous beer to have on a cold night.

I had a fabulous time in this class. My classmates were great, the course was well organized and Mirella was a fabulous, fun, enthusiastic, and interesting teacher. If you see a course she is presenting, I would recommend that you take it.

For me now, my beer geek factor has gone up. Time to put into practice what I have learned.
Posted by Swordsman at 06:21