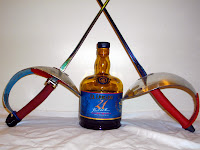 Last night 16 owners met at Shoeless Joe's in Oakville for the 2010 draft for The Great White North fantasy baseball league.

This league has been in existence since 1990. This draft would bring in the 21st season for the league.

And for the Rumrunners! 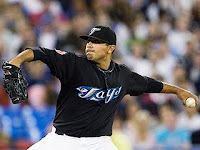 My last visit to the league championships was 2 seasons ago, which I not only lost badly but had players injured during the series, that would not play at all the following year.

Time for a return visit. Time to bring the Dean Anderson Cup home.

I had a solid base of 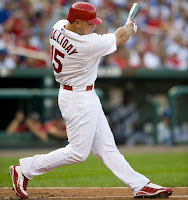 12 protected players going into the draft but had lower draft picks to fill out the other 12 positions. The Rumrunners came out of the draft rather well and with working the waiver wire during the year, avoiding the injury bug plus having a pitching staff anchored by Ricky Romero and Matt Holliday of the Cardinals leading the offense, (both pictured) a championship is within reach

It is a head-to-head competition every week, with 3 games per week being played by each team. Hopes are to start the season with 3 wins in Week 1.

Here is the 2010 edition of the Rumrunners starting lineup:

Good luck! But you know it's not real :)