Today was the inaugural La Belle Buffalo Fencing tournament (La Belle is a fencing term meaning "the deciding hit during a bout, normally used to describe the situation when the score is 4-4 in foil or sabre").

We had talked about this for a couple of weeks so Chacho, Sukhveer (Suk) and Eric piled into my car with our pile of gear and off we rolled.

Twenty-two were entered in to sabre competition and seven were from Canada.

The tournament was well-run and lots of fun.

Canada was well-represented as Horia won gold (his second in two weeks) and Suk got the bronze. Being in the top eight finishes is excellent and Canada had Chacho finishing 5th, Eric 7th, and Kristina 8th giving Canada five of the top eight spots.

Eddie ended up 13th and I, who was quite inconsistent, finished 14th, being knocked out by the other bronze medal winner, Dalton, 15-9. I fell behind in the last bout but adjusted my game and was mounting a comeback. But, alas, I had dug myself too deep of a hole.

Despite a 45 minute wait at the border on the way home, the trip was well worthwhile. The organizers were quite welcoming and efficient in running the event. I enjoyed the atmosphere of the room. Everyone was quite friendly ........... until they hit the fencing strip, that is.

If they run a second La Belle Buffalo, I'll be there along with the rest of the Canucks.

Here is Horia (on the left) in action during the gold medal match. 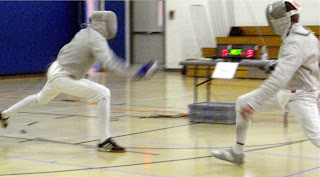 Here is Suk being presented with his bronze medal. 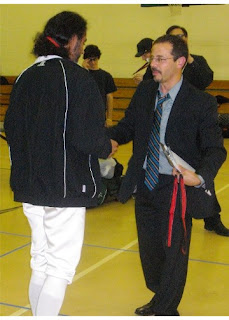 Here is Horia being presented with GOLD! 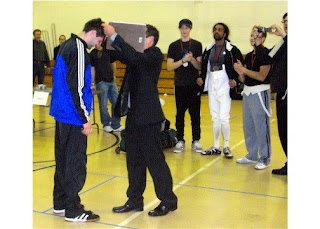 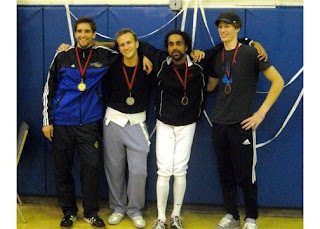