The Invasion of Buffalo 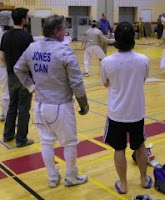 A couple of weeks ago, I found a fencing tournament "La Belle Buffalo" taking place this weekend in Buffalo, NY, which is only a couple of hours away from where I live. I contacted the organizer to see if the event was closed to Canadian fencers or if we could join in. Garret said he would check and get back to me.

A couple of days later, I saw the event posted on the Ontario Fencing Federation Website so I emailed Garret to say, "Guess that's a yes!"

He replied, saying "Sure" and he hoped I would come down and bring some of my friends. The posting on the website stirred up some interest here so, of the 25 Sabre fencers registered for the event, 7 are heading down from Ontario.

As it is a mixed all ages event, once again I will likely be the oldest there. Sometimes this works to my advantage when going against a new competitor. They underrate me, thinking the old guy must be a pushover. I do have the ability, though, to, in the words of Canadian rock group Trooper, to "raise a little hell of my own!"

As fencers, we have to leave a little early "cause an armed party might look like a mini-invasion to the border guard", according to my friend, Chacho

It should be great fun for us, heading down to fence at a new venue, against new competition, meet some fellow fencers, and hopefully haul some medals back across the border to Canada. Wonder if we will have to claim them? If I win, I certainly will!

Time to "Raise a little hell!"