This week is another American beer, Burning River Pale Ale, which comes from Great Lakes Brewing in Cleveland, OH ... not to be confused with the Great Lakes Brewery Company located in Toronto.

Great Lakes Brewing, which was founded in 1988 by brothers Patrick and Daniel Conway, is Ohio's oldest brewery.

It seems that Patrick always had an interest in beer and after graduating University toured many small breweries in Europe. His brother, Daniel, was meanwhile chasing a career in commercial banking. Not exactly a brewer in the making! When Patrick discussed opening his own brewery, Daniel used his education and experience to bring the dream to a reality. 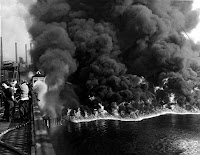 years after the Cayahoga River caught fire in 1969. Even though the flames were more than five stories high, it was not as damaging as another fire on the same river in 1952 which caused more than a million and a half in damages. Seems that more chemical than water flowed in the Cayahoga in those days. Afterwards, Cleveland cleaned the river and the "flats" area is now a very popular location for tourists and locals.

Seems an embarrassing event to celebrate in the name of a beer. The 1952 river fire is pictured to the right and to the left, the image they use for their beer label features cleaner flame and a more scenic city.

And the beer itself?

It weighs in at ABV: 6.0% and an IBU of 45. The ale pours an amber colour, holds a good head and a nice lacing remains on the glass. It has a nice hoppy bite when you taste it, which lasts through the finish.

Despite the fact that Burning River has won the Gold Medal in the World Beer Championships four years in a row from 2005 to 2008, I find this a good beer to drink but not an exceptional one. Good enough that the six pack did not survive the weekend.