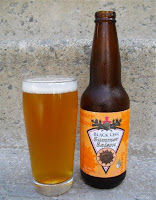 Saturday was a rainy day so Teena and I set off to Black Oak Brewing Company in Etobicoke.

I had heard many good things about Black Oak Summer Saison and wanted to give it a try.

The problem is it is only available at the brewery. But I am a fan of Black Oak products so visiting the brewery where it is all made would not be a hardship.

The first time I tried a Black Oak Beer was at this year's Superbowl party and beer tasting at Craig's where we all sampled 10 different beers. Black Oak Nut Brown Ale won the day against some strong competition. Since then, I tried and loved their Black Oak Pale Ale which is now a staple in our fridge.

When Teena and I walked in, we were greeted by Black Oaks' President, Ken Woods, who asked us if we wanted a tour, a quick lesson in how they make their beer or was looking to buy. "All the above," I replied.

Ken is a very nice and extremely knowledgeable person. He showed us around, explained the

pieces of equipment and the various ingredients they use in brewing. It was very insightful and he never rushed us.

Then we were treated to samples of Black Oak's three ales. It was my first taste of Summer Saison (pronounced say-uh, which admittedly I am having trouble with). I certainly enjoyed its refreshing taste and was anxious to get some home to try it on its own as my first beer, before my taste buds were influenced by other flavours. So with a 12 pack in hand, we thanked Ken and left.

As Ken explained, Summer Saison is named after Saison Style Ales traditionally brewed in the French-speaking part of Belgium years before to provide refreshment to workers during the late summer harvest. It is light in alcohol (Summer Saison being 4.1% alc.vol) so the workers can continue to work.

Summer Saison is flavored with orange zest and Coriander. I have found that orange zest can provide a bitterness that matches well with the bitterness of the hops but was unsure about coriander. Coriander seeds "have a lemony citrus flavour when crushed. It is described as warm, nutty, spicy, and orange-flavored."

The label says the ale is unfiltered but still pours a clear golden colour.

The taste is very refreshing.

I thought I could taste the orange, yet Teena thought she could only taste the coriander. The flavours are very well-balanced, creating a beautiful, refreshing delicious beer that would be very enjoyable while sitting out on a warm summer's afternoon.

My hope is that this becomes popular enough that I will be able to buy it at the beer store or LCBO. Instead I will be making another run out to Black Oak to purchase some more.

Ken Woods and Me 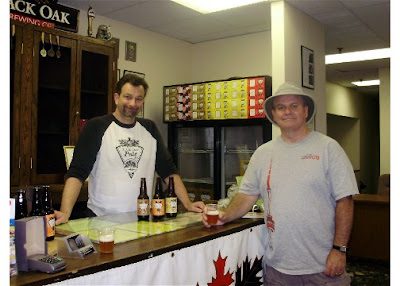