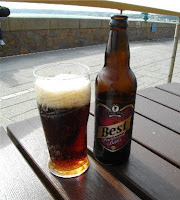 I toured the castle and came back to shore as the tide started coming in. Jersey Island has the second highest tidal surge in the world. This month the tide rises 12 metres. The Bay of Fundy is number 1. It had been a long day, my first on the island. As I had never seen the tide come in before, I decided to have a rest and watch it come in.

There was a snack shop there so I went in and discovered that they carried beer. I asked if they had anything local and they hurriedly showed me to the Mary Ann Best Bitter.

It seems that Mary Ann has been around for more than a century, having disappeared for a

short time before being brought back by Jersey Brewery. It was brewed throughout the First World War and during the German occupation in World War 2.

Jersey Island people are very fond of this beer and I can see why. It is nicely coloured and, as you can see by the picture, pours with a good lasting head. Although only 3.6% ABV, it has a well-balanced flavour. The company uses roast chocolate malt which aids in the colour and taste and the brew finishes with a pleasant bitter hoppyness, which is by no means over powering. Just a nice beer to sip on and would make a great session beer.

After one of my matches when I was fencing on Sunday, I looked at the schedule and saw that I sat out the next three matches. I told to the judge that I had time for a nap and he suggested, "You have time to head into town for a Mary Ann!"

"Good beer but not near as good since they started putting all that air into it," he commented. Spoken like a true English beer lover.

Here is a before and after pictures of the tide coming in around Elizabeth Castle. The shots are only an hour or so apart. 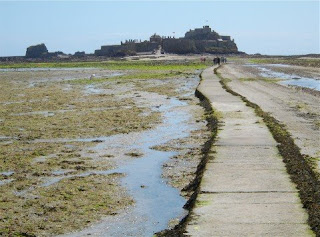 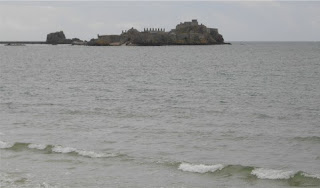 Great to see you blog about Mary Ann Best!