LCBO Tasting Note: Created by the Prince of Wales & imported from Britian. This traditional organic ale is ruby in colour & is rich in body with a balanced bitter flavour & a rich hop aroma. It is made using barley from Prince Charles Home Farm at Highgrove & selected organic farms. Contains no artificial or genetically modified ingredients.

I always wonder about the term "organic" and am somewhat skeptical of its use in the food industry. It seems a license to raise prices, which makes me wonder. If a farmer is using just plain cows**t, how can this cost more than a someone who buys chemicals? In some cases, the price is almost double. Duchy Original Organic Ale does not fall into this price category as the price is very reasonable.

country estate in Gloucestershire. Back in 1986, the prince sought to turn the farm into an organic farm: "The idea was simple: to see if, instead of embracing ever more intensive farming methods, it was possible to make a profit by selling food that emphasised sustainable production, natural ingredients and traditional skills. That profit could then be used for charity, forming what The Prince called a "virtuous circle"

Their first product sold back in 1990 was an organic biscuit.

Since then, they have branched out into many fields ... food, wine and now beer. All profits go to The Prince’s Charities Foundation, which was founded by HRH The Prince of Wales in 1979. The Prince established the Foundation to enable him to help support a variety of charitable causes and projects. 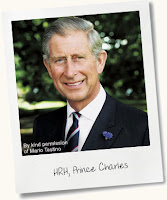 Now I must say that I am not a big fan of Prince Charles and believe that England's royalty is now just a powerless symbolic throwback to times long gone.

I also believe that the royal family is a necessity to the spirit of England. Witness the defeat in the people when they thought the Royal Family was about to leave England during the blitz. They stayed which allowed Churchill to give rise to one of his most powerful speeches. Also witness the joy of the people at the marriage of Charles and Lady Diana Spencer (which Charles ultimately screwed up). The royal family does have the means to unite their country, which I am sure that we will see again when Charles' son, William, becomes the next king.

The royal family engages itself in charity work and Price Charles does his share through the Prince's Charities. Duchy Originals Organic Ale is part of this group.

The beer pours a darker amber colour with a good head which stays. Good thing as I had some camera problems. The aroma is nice. The malt taste comes though and there is no hoppiness in the flavouring or finish. I found the first one a little weak in flavour but the next one had a full flavour and body to it.

Brewed by one of my favorite English Breweries Wychwood Brewery which I have featured before, I found this to be a good beer but not a great beer. I like a hoppy beer with some bitterness and this one does not fit the bill.

If you do like English beers and hate the bite of an English bitter or Ale, this one might be for you.
Posted by Swordsman at 20:01