For Super Bowl, my friends and I gathered at Craig's to watch the game.

I brought 10 Ontario beers to sample.They consisted of the OCB Discovery Pack #2 which contained one each of Nickel Brook Apple Pilsner, Robert Simpson Confederation Ale, 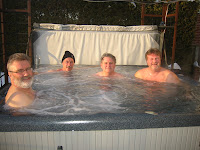 Before we could start, we needed to loosen up. And what better way than to jump into the hot tub? It was 4C, bright and sunny and a great way to spend 3/4 of an hour loosening up. Then it was a dash to the house to dry off, change and start into the sampling.

We used the same system to score that they use at the C'est What tastings.

Everyone enjoyed the tasting and the Black Oak Nut Brown Ale came out on top.

Here are the top 10 as rated by our panel: 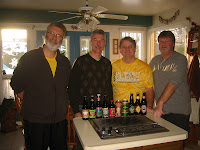 ** Signifies the brand is part of the OCB Discovery Pack

My favorite, not counting the Sgt Major (which I am well familiar with and have a bias towards), was the King's Pilsner, followed closely by the Black Oak.

Here are the rest of the panels top choices.

According to Alfred, it was "an excellent evening of beer, football and bonding."

Looks like you had a fun time! What a great way to spend Superbowl Sunday. You must have enjoyed having your friends being on the beer tasting panel.