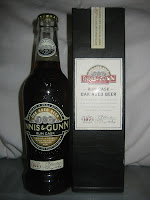 Before Christmas, I was in the LCBO in Liberty Village, once again searching for something new to try. and got to speaking to a fellow beer lover about, what else, beer. He too was looking for something different to try and was going to also pick up his favorite, Innis & Gunn Oak Aged beer. He highly recommended that I try this and went on his way.

This is beer which is aged in whiskey barrels and, although unique, I was very hesitant to purchase it.

Then a few weeks later I was in the same store and came upon a new product from Innis & Gunn, their Rum Cask Oak Aged Beer. I love beer and love rum. What kind of marriage would the two make together? At $4.95 for a regular size bottle, I was hoping it wouldn't be a divorce.

Innis & Gunn opened in 2003. The company's name comes from the middle names of founder, Dougal Sharp and his brother, Neil. According to their website, the process of making their beer was discovered by accident and they lay claim to be the only brewer that uses this method in the world. 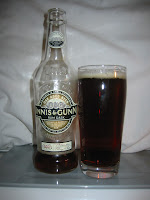 In 2002, whiskey makers William Grant & Sons hired brewer Dougal Sharp to create a beer that would be stored in bourbon casks in order to bring a beer taste to their whiskey. He created a very malty beer which soaked in the casks for 30 days, then was dumped to make room for the whiskey.

It seems that after dumping many thousands of gallons of beer, a very sad thought indeed, someone brilliantly thought about maybe having a taste of the beer before dumping it. They found that the bourbon soaked rum barrels created a beer which they liked. After analyzing the beer and bringing in professional tasters, Innis & Gunn Oak Aged Beer came to the market in August of 2003.

In 2008, Innis & Gunn released a limited production of its beer which had been matured in oak barrels that previously was used for navy rum. The maturing period is a very lengthy 107 days. 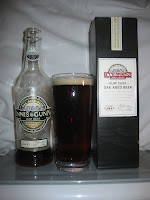 So how did it all turn out?

The beer pours with a very nice head and is a dark reddish brown colour. Both Teena and myself found very little aroma.

It has a pleasant malty taste and is a sweeter tasting beer. Knowing that it has soak in rum barrels, I was very surprised at the subtle flavouring as I expected something more harsh and overpowering. It is a very nice tasting beer and you can sense the lingering rum in the finish.

All in all, I did like this beer and was glad I tried it but have to say that I wouldn't find myself buying it again. If you enjoy whiskey and beer, I would suggest trying the oak aged beer. If you like rum, try this one. It was a limited production so you would need to pick one up soon.

It is such a different process, it is worth trying at least once.
Posted by Swordsman at 16:06