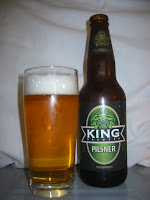 I lived in Aurora for more than twenty years and happily moved down to the big city of Toronto back in 2002. The craft brewery industry had not yet found a footing in Ontario while I was there but there were many places around where you could go to brew your own beer, which I did on a very frequent basis. I even developed my own quite hoppy recipe.

So it was with great interest when I discovered that a craft brewer had opened up shop back in my old neck of the woods. King Brewery opened its doors in 2002 with two lines of beers, a European Dark Lager and a Czech Pilsner. Being one who enjoys a good Pilsner, I picked up a six-pack of King Pilsner.

It seems that while I was crafting my own beer at "Brew Your Own" places, Philip DiFonzo was making his own in his basement. Very successfully too. He would enter his beer in Home Brew competitions and came away with 16 awards including first place in the European Dark Lager category in the 2000 Canadian Homebrew Competition, and first place for his stout in the "All About Ales" competition.

In order to improve on what he was doing, he took two years to complete the Beer Judging Certificate Program, and now is only one of 1,200 beer tasting judges in North America. 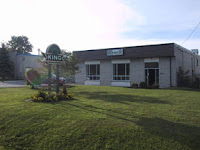 Finally he decided to take his passion to the marketplace. After two years of consumer testing and trying 150 different recipes, he finally came up with the beers which he wanted to brew and opened King brewery.

He loves the European taste and wanted the authentic Czech style in his pilsner. Seems he goes through great lengths to achieve this. He uses distilled water which he remineralizes to create the same water used in Pilsen Czech Republic. He imports all the malt, yeast and hops from the Czech Republic.

There is a brewing method called decoction brewing which is used regularly in Europe but not over on this side of the pond. It is a more labour intensive method and adds more hours to a brewing day. King brewery uses this method.

Normally the malt is boiled once into a mash and then used from that point. In decoction brewing, one third of the mash is removed and reboiled separately then added back into the original mash. This is supposed to bring an added complexity to the malt and clarity to the beer. It was a method developed in times before the invention of the thermometer.

So how does it all turn out?

Quite nice actually. The beer pours with a nice head which remains. It is a tasty pilsner, one you can sit back and enjoy a few while watching the game or on a nice summer afternoon. This pilsner has a subtle bitterness which remains in the finish. I like my pilsners a little more bitter and bolder in their finish, but this is a pleasant tasting beer which I 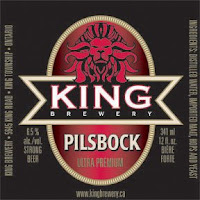 King Brewery does have another limited release which is only available at their brewery which they call a Pilsbock. It is a high alcohol (6.5%) combination of a Pilsner and a Bock beer. Going to be a drive north in the near future to my old stomping grounds to try out this one.

I see another Beer of the Week from this brewer! Anybody up for a road trip!
Posted by Swordsman at 16:30