In 2008, I was very random in my Beer of the Week. Whatever struck my fancy when I went into the good ole LCBO was what I tried. Over the holidays, though, I found many beers that I wanted to try and now have an inventory of them (I'm an old warehouseman so know how to handle inventory).

So for 2009, I plan to feature an import one week and a Canadian brew the next. As always, I will do my research and write my blog right up to the point where I taste the brew and then continue to write from that point.

To start the new year, I decided to go with Samuel Smith's Imperial Stout, which I purchased just after Christmas. I enjoy stouts and starting the year sampling one from a centuries old brewery certainly appealed to me.

Samual Smith remains "fiercely"independent and has been in operation since 1758 in Tadcaster and is Yorkshire's oldest brewery. It draws its water from an 85 foot deep well which was dug the same year. The strain of yeast they use to ferment their beer was developed in the early 1900's. Even the method they use to brew their stout dates back over 200 years.

It is called the Yorkshire Square system and Samuel Smith is one of the very few breweries in the world to still use this system. Although modern methods could be used, Samual Smith's spokesman claims the old system adds "complexity and full-flavoured character to the beers".

In short, the system uses two square stone tanks, one placed on top of the other. As the beer ferments, it bubbles up from the lower tank to the top tank. This helps to aerate the mix and filter off the dead yeast. The process takes six days to complete.

One final quaint historical tradition of the brewery is that its local deliveries are made by grey Shire horses which they keep at a stable at the brewery. They also have a pub attached to the property called the Angel and White Horse Inn. I'd love to go to Tadcaster one day to experience this.

What is Imperial Stout? It was originally brewed in Great Britain for sale to the Czarist courts in the old Tsarist Russian Empire. It was brewed stronger to survive the harsh cold transport to Russia and is usually 7% alcohol or better. 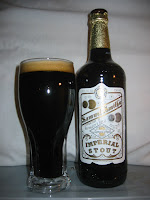 Now to the taste.

It pours a deep, dark brown; in fact, it is almost black.

The taste is very smooth and very creamy. There is a slight bitterness to the finish and a long favorable lingering aftertaste.

This is a stout that I feel can stand up to any stout in the world. I know that's quite a claim but that's how much I am enjoying it. I like the size of the bottle, the old style label, the historical method of brewing this brew and, most importantly, the taste.

I will be drinking this again in the future, either here at home or hopefully one day in an old pub in Tadcaster, Yorkshire England.
Posted by Swordsman at 15:23