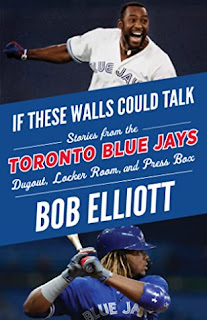 I just finished reading If These Walls Could Talk: Toronto Blue Jays: Stories from the Toronto Blue Jays Dugout, Locker Room, and Press Box by Canadian Sports writer Bob Elliot.
Since their inception in 1977, the Toronto Blue Jays have been one of the most dynamic franchises in all of baseball. As an award-winning, longtime Jays columnist, Bob Elliott has witnessed more than his share of that history up close and personal.
In "If These Walls Could Talk: Toronto Blue Jays", Elliott provides insight into the Jays' inner sanctum as only he can. Readers will gain the perspective of players, coaches, and front office executives in times of greatness as well as defeat, making for a keepsake no fan will want to miss.
This is not a history of the Toronto Blue jays from their inception in 1977. Instead, it's the story of the Blue Jays from their back to back World Series Victories to the near present.
And it's not just a history. The book is mostly the behind the scene stories, how different deals were made. Humorous, never before told tales. It's a book that as a Blue Jay fan, I really enjoyed.
About Bob Elliot 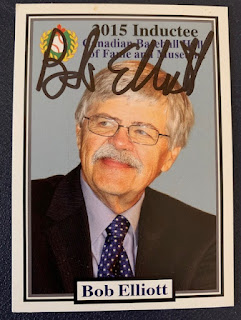 Bob Elliott (born September 10, 1949) is a Canadian former sports columnist, who covered professional baseball in Canada. He began in 1978 as a reporter for the Ottawa Citizen, covering the Montreal Expos, before leaving in late 1986 to cover the Toronto Blue Jays for the Toronto Sun. On June 1, 2016, Elliott announced his retirement.

He has written three books, including Hard Ball about George Bell, in 1990; The Ultimate Blue Jays Trivia Book, in 1993; and The Northern Game: Baseball The Canadian Way, in 2005. Elliott is also the mind behind the Canadian Baseball Network website, which tracks all active Canadian baseball players.

In 2012 became the first Canadian to be awarded the J.G. Taylor Spink Award by the National Baseball Hall of Fame and Museum in Cooperstown, N.Y.
Posted by Swordsman at 10:45