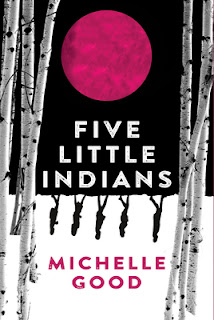 I just finished reading Five Little Indians by Michelle Good.
Winner of the 2018 HarperCollins/UBC Prize for Best New Fiction Michelle Good's FIVE LITTLE INDIANS, told from the alternating points of view of five former residential school students as they struggle to survive in 1960s Vancouver—one finding her way into the dangerous world of the American Indian movement; one finding unexpected strength in motherhood; and one unable to escape his demons - and the bonds of friendship that sustain them, inspired by the author's experiences.
This is an amazing read. The story alternates between each of the five characters in the novel, all of whom were kidnapped by the authorities and placed in one of BC,s  residential schools on an island which was run by a church. Most of the story takes place after their release, which sees them leave by different methods and how their lives cross in Vancouver at different points.
The story of each is well told. I found myself routing for each and every one of them, cursing the system that saw them having to go to one of these monstrous run institutions and hating with a passion, the man the kids knew simply as Brother. Certainly had no love for the sister who ran the institution either.
A powerful story of the effects a horrible system put in place and was kept running by different governments through the decades, had on innocent indigenous children's lives. I can see why it received so much acclaim. it won the WINNER: Governor General’s Literary Award for Fiction, the Amazon First Novel Awards and the the Kobo Emerging Author Prize plus was the finalist for the Scotiabank Giller Prize and the Atwood Gibson Writers Trust Prize. All well deserved.
About Michelle Good 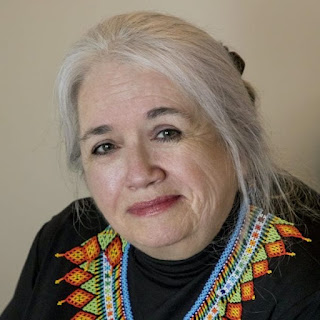 Michelle Good is a Cree writer and a member of the Red Pheasant Cree Nation in Saskatchewan. After working for Indigenous organizations for twenty-five years she obtained a law degree and advocated for residential school survivors for over fourteen years. Good earned a Master of Fine Arts in Creative Writing at the University of British Columbia while still practicing law and managing her own law firm.
Her poems, short stories, and essays have been published in magazines and anthologies across Canada, and her poetry was included on two lists of the best Canadian poetry in 2016 and 2017. Five Little Indians is her first novel.
Posted by Swordsman at 17:21