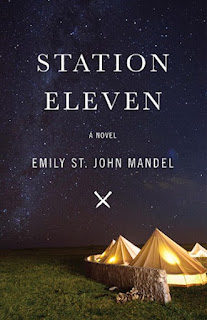 Set in the days of civilization's collapse, Station Eleven tells the story of a Hollywood star, his would-be savior, and a nomadic group of actors roaming the scattered outposts of the Great Lakes region, risking everything for art and humanity.
One snowy night a famous Hollywood actor slumps over and dies onstage during a production of King Lear. Hours later, the world as we know it begins to dissolve. Moving back and forth in time—from the actor's early days as a film star to fifteen years in the future, when a theater troupe known as the Traveling Symphony roams the wasteland of what remains—this suspenseful, elegiac, spellbinding novel charts the strange twists of fate that connect five people: the actor, the man who tried to save him, the actor's first wife, his oldest friend, and a young actress with the Traveling Symphony, caught in the crosshairs of a dangerous self-proclaimed prophet.
Wow! The story swings back and forth between a number of characters and time periods. It sounds like a complicated read, but is far from it. We're told the story of each character from before the collapse of the world to 20 years post pandemic in bits and pieces..
When the pandemic started I swore that I wouldn't read a book based on the pandemic. This one caught my eye as it was published in 2014, and is an extreme example of a virus. When a person is infected, they are dead in 24 hours. Hospitals and the medical community can't keep up and within a month or two, 98% of the earth's population are dead.
Station Eleven, was a finalist for a National Book Award and the PEN/Faulkner Award, plus it won the 2015 Arthur C. Clarke award for science fiction.
Posted by Swordsman at 12:30