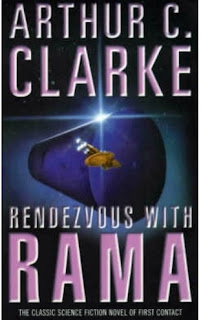 Today I finished reading Rendezvous With Rama, an Arthur C. Clarke novel published in 1973.
At first, only a few things are known about the celestial object that astronomers dub Rama. It is huge, weighing more than ten trillion tons. And it is hurtling through the solar system at an inconceivable speed. Then a space probe confirms the unthinkable: Rama is no natural object. It is, incredibly, an interstellar spacecraft. Space explorers and planet-bound scientists alike prepare for mankind's first encounter with alien intelligence. It will kindle their wildest dreams... and fan their darkest fears. For no one knows who the Ramans are or why they have come. And now the moment of rendezvous awaits — just behind a Raman airlock door.
It's an intriguing story throughout. Not one of your alien vs mankind novels, but one of exploration of a massive alien created spaceship or maybe, an alien created world. As it was written 48 years ago I found it interesting that some of the technological challenges the crew faced in the 2130s have already been solved.
The novel won the 1974 Nebula Award and the 1974 Hugo Award, both for Best Novel.  It's such an engrossing read, I can see why.
Posted by Swordsman at 16:38