The Girl From the Channel Islands by Jenny LeCoat 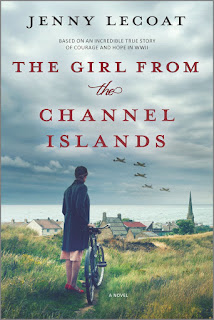 Back in 2009, I was in St Helier, Jersey, which is located in the Channel Islands for the Commonwealth Veterans Fencing Championships. I had an excellent time exploring the city and found it quite beautiful.
During the trip, I discovered the island was captured and occupied by the Nazis. As the description below says, the Channel Islands were the only part of Great Britain captured by Germany. A side note, it was also the last army to surrender after Nazi Germany fell.
So, when I saw what The Girl From the Channel Islands was about, I had to read it.
The year is 1940, and the world is torn apart by war. In June of that year, Hitler’s army captures the Channel Islands—the only part of Great Britain occupied by German forces. Abandoned by Mr. Churchill, forgotten by the Allies and cut off from all help, the Islands’ situation is increasingly desperate.
Hedy Bercu is a young Jewish girl who fled Vienna for the island of Jersey two years earlier during the Anschluss, only to find herself trapped by the Nazis once more—this time with no escape. Her only hope is to make herself invaluable to the Germans by working as a translator, hiding in plain sight with the help of her friends and community—and a sympathetic German officer. But as the war intensifies, rations dwindle and neighbors are increasingly suspicious of one another. Hedy’s life is in greater danger every day. It will take a definitive, daring act to save her from certain deportation to the concentration camps.
A sweeping tale of bravery and love under impossible circumstances, Hedy’s remarkable story reminds us that it’s often up to ordinary people to be quiet heroes in the face of injustice.
Author Jenny Lecoat does an excellent job of describing the years of occupation and the hardships the people endured. Would it be a happy ending or not? The conclusion wasn't dependent on what the author felt it should be.
Why? The author explains: The story is based on documented history ... Hedy Kurt, Dorthea and Anton were all real people, although only basic facts during those years are know, so how they met and the relationships came about is fictionalized in the novel.
I really enjoyed the story and the way it was written.
Posted by Swordsman at 11:40