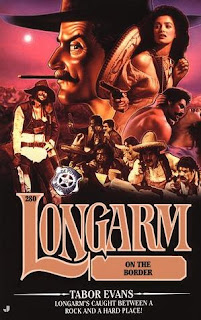 Every once in awhile I feel the need for some good junk-food reading. Longarm is in this category for me. I've read many and found them enjoyable.

Longarm books are a series of western novels featuring the character of Custis Long, who is nicknamed Longarm, a U.S. Deputy Marshal based in Denver, Colorado in the 1880s. The series is written by Tabor Evans, a house pseudonym used by a number of authors. Lou Cameron helped create the character and wrote a number of the early books in the series. The first book was published in 1978 and the final one (#436) was published in March 2015. In addition there are 29 "Giant" editions published as well.

The Longarm series is a mainstay of the "adult western" genre which arose in the 1970s. These books are distinguished from classical westerns by the inclusion of more explicit sex and violence.

This book is listed as number 280 in the series, but appears to be a reprint of #2. I read it so many years ago, the story felt new.

Deputy U.S. Marshal Custis Long is dispatched to El Paso to extradite a prisoner from Mexico-and winds up target practice for some angry polecats. This is one of the weakest stories in the series, although it does have a nice twist near the end.