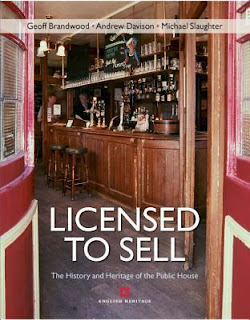 Today I finished License to Sell, a book on the history of pubs in England.

Alcoholic beverages have long formed a part of British culture and over the centuries the authorities have made strenuous efforts to control the form and operation of public drinking establishments (with varying degrees of success!).

The Golden Age of pub-building was at the end of the nineteenth century and many of the finest examples are illustrated here. It was brought about by a combination of forces which are all explored – the influence of the Temperance Movement, competition from rival forms of entertainment, and efforts on the part of magistrates and government to improve the pub stock.

The book contains a stunning photographic survey of our pub heritage and lists most of the finest and interesting surviving examples. This new edition also explains the changes that have affected pubs, their culture and appearance during the past seven years.

This book does cover everything one would like to know about the history of pubs in Britain, seemingly right from England's earliest years. It even expands to short history's of pubs in Wales and Scotland. My favorite part was all the gorgeous photography. Interior shots, exterior shots and closeups of the many artifacts, pictures, artwork and other items which make up a pubs atmosphere.

Makes me want to head back over to England for a pint or two.
Posted by Swordsman at 11:42