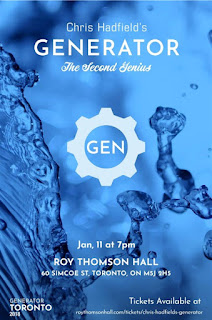 Tonight I went to see Chris Hadfield's Generator at Roy Thompson Hall. Hadfield, from Sarnia, Ontario, has been an astronaut on three space missions, commanded the ISS space station and was the first Canadian to venture out on a space walk.

He became well known for his many videos and tweets during his time on the ISS in which he showed the daily life of space travel and how differently day-to-day personal functions had to be performed. He ended his last days in space by recording a personal version of Space Oddity all of which can be found on his website.

This is the third year for the show and my first. Going in, I had no idea about what to expect with Generator.

Generator is back! Chris Hadfield’s famed comedy, music and ideas extravaganza is returning to Roy Thomson Hall. Last year saw Neil Gaiman and Amanda Palmer musically eulogize Leonard Cohen, the world’s first cyborgs turn colour into sound, Mythbuster Adam Savage wax philosophic, and much, much more. It isn’t an easy show to describe – you just have to experience it to understand.

The theme of this year’s show is ‘The Second Genius’ and will host a variety of guests from the UK, Europe, Canada and the United States. As with the last two years of the more than a dozen presenters, the only guests announced in advance are the perennials; Chris Hadfield as host, BBC’s Robin Ince as emcee and Tupperware Remix Party as the house band - all kicked off by the show’s creative engine, Evan Hadfield.

When I read the description of the show, I wondered if it would feel piece together or flow. It definitely flowed. The show was energetic, eclectic, electric, entertaining and educational.

I though Chris Hadfield would be the host but that duty was done by Robin Ince, a British comedian, who flew over from England just for this show. He was so funny that I was in tears. I wish I had written down the names of all those who took the stage (surprisingly those names are never announced before the show but still played to a full house) but suffice to say it was never dull.

There was a stage band, dressed in sci-fi costume. Evan Hadfield, Chris's son, started the show and was great. I enjoyed everyone but here are just a few of my favourites

One performer came out to compose a song in front of our eyes and ears, using only the sound of the entire audience going "Shhhhhhh!" He broke down the sounds and was comical in describing what he was doing and in a few minutes, he had a song in place, just from that one sound we made.

Sarah Parcak, who is a space archaeologist who looks for ancient sites on earth using satellites, describing her job, and a website set up for the world to use to help with the research. I am definitely looking into that one more deeply and will be writing about it soon.

Moshe Safdie, an architect who designed Habitat at Expo 67 in Montreal, showed his favourite and most important international works.

There was a comedian, originally from Canada who flew up from California for the show. A woman spoke about the work her company, Open Bionics, in building robotic arms for kids. Not normal ones. They ask kids what they want and bionic arms are built which turns their handicap into a thing of envy, so much so that adults now want them.

Poets, singers, all joined the show. During intermission, Chris Hadfield came out with his guitar to play and sang Piano Man with the band. Yes, he was great. He also showed photos he took from space. It turns out that the old thought that the Great Wall of China was the only man-made thing that could be seen from space is untrue. It blends in too well with the terrain but Toronto's 407 can be clearly seen. He was amazing and fun.

All I can say is that I missed his first two Generators but will not be missing any more. 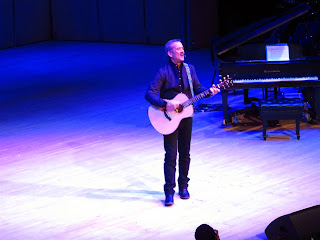 Thank you for the write-up! I was at the show as well but have had a hard time finding a good summary afterwards that I could refer to or direct others to; thank you for providing one. :)

Your welcome. There was so much that happened during the show to describe that I didn't feel I did it justice. Glad you liked it.