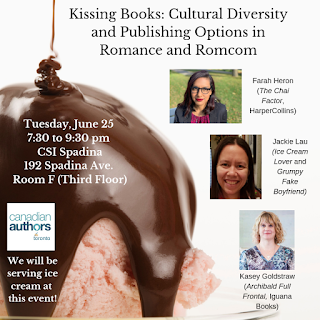 Tonight I attended an event, Kissing Books: Cultural Diversity and Publishing Options in Romance and Romcom, put on by the Toronto Chapter of the Canadian Authors Association .

Canadian Authors – Toronto is excited to welcome three Toronto romance writers to discuss cultural diversity and publishing options in the romance and romcom genres. Authors Farah Heron, Jackie Lau, and Kasey Goldstraw each bring their own perspective and experience with publishing romance. Farah will represent the traditional publishing track with a short talk about her debut novel, The Chai Factor, out this month with HarperCollins Canada. Jackie will share how she became a one-woman indie publisher of her own romance novels, and Kasey will discuss pulling her 20-year-old manuscript out of hibernation and bringing it to life with the help of a hybrid publisher. Farah and Jackie will also talk about personally adding to the growing cultural diversity of the romance genre by populating their romance novels with Chinese-Canadian characters and “brown people falling stupidly in love.” A Q&A with the authors will follow their presentations. And each author will be selling and signing copies of their books.

It was an enjoyable night. All three authors spoke of their experiences in each of the different areas of publishing. Oh and just so you know, there is no easy route to publishing a decent book. It's all hard work.

Farah and Jackie also spoke of the challenges of being published as a person or even woman of colour, even to the idea of how publishers can be hesitant to have non-white people on the cover of their books. There was a Q&A afterwards. It was quite interesting.

There was ice cream. There was also door prizes. I won a book, Year of the Slut, a feminist version of Fifty Shades, by Jennifer Lieberman. I'm looking forward to the Toronto Chapter's next event. 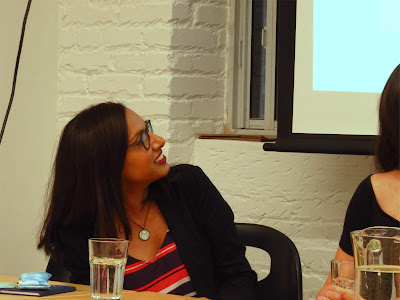 After a childhood raised on Bollywood, Monty Python, and Jane Austen, Farah Heron self-rejected her writing career before jotting down a single word, despite admitting her ultimate fantasy was to be a writer. But when she could no longer keep the story arcs straight in her daydreams, she started writing a few years ago and never looked back. She writes romantic comedies and women’s fiction full of huge South Asian families, delectable food, and most importantly, brown people falling stupidly in love. Prior to writing, Farah had careers in human resources and psychotherapy. She lives in Toronto with her patient husband, surly teenager, and delightful middle-grader. Farah is the president of Toronto Romance Writers. Farah’s debut novel, The Chai Factor, is due out on June 11 from HarperCollins Canada and has been featured in Elle Canada, Quill &Quire, CBC’s The Next Chapter, Bustle.com, and Book Riot. 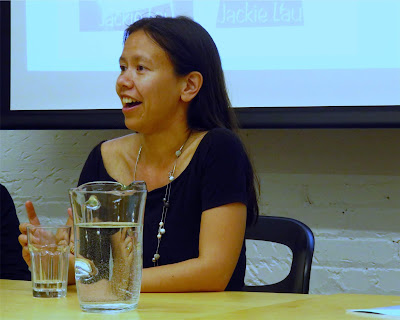 Jackie Lau decided she wanted to be a writer when she was in Grade 2, sometime between writing “The Heart That Got Lost” and “The Land of Shapes.” She later studied engineering and worked as a geophysicist before turning to writing romance novels. Jackie previously wrote erotic and contemporary romance as Laura Jardine and now writes romantic comedy with Chinese-Canadian heroes and heroines. Since she began self-publishing in May 2018, she has released six novels, including Grumpy Fake Boyfriend, The Ultimate Pi Day Party, and Ice Cream Lover, and one novella, One Bed for Christmas, a prequel to her Baldwin Village series. Jackie lives in Toronto with her husband, and despite living in Canada her whole life, she hates winter. When she’s not writing, she enjoys gelato, gourmet doughnuts, cooking, hiking, and reading on the balcony when it’s raining. You can purchase all of Jackie’s books through Amazon, Kobo, and other online book retailers. 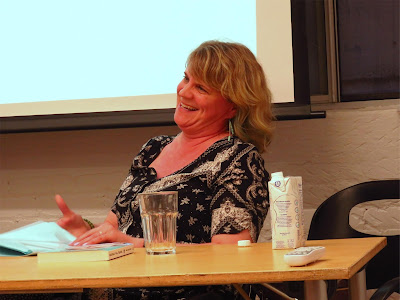 Kasey Goldstraw was born and raised in Vancouver, and she studied English at the University of British Columbia and creative writing at Capitano College. At the urging of one of her writing professors, she turned one of her short stories into a novel, but she stuck the manuscript in a drawer and left it there for 20 years while life went on. It was Kasey’s husband, Peter, who kept reading it year after year and prodding her to send it to publishers. Since teaming up with Toronto hybrid publisher Iguana Books, Kasey’s debut novel, Archibald Full Frontal, has been shortlisted for the 2019 Kobo Emerging Writer Prize. Thanks to the mindfulness skills she’s been able to cultivate as the co-owner of Toronto yoga studio Tranquility Wellness, Kasey is waiting patiently for the Kobo results to be announced on June 27. To date, she has only gnawed off a couple of fingernails.
Posted by Swordsman at 22:39