Play - The Woods are Dark and Deep 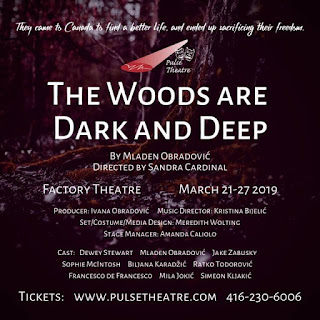 This evening Teena and I went to see The Woods are Dark and Deep at the Factory Theatre at the corner of Bathurst and Adelaide.

They came to Canada to find a better life, and ended up sacrificing their freedom. Our story follows a small group of Serbian and Ukrainian immigrants who ended up in a Canadian internment camp during WWI.

This is Pulse Theatre’s fifth production and we are very excited to work with a mix of old and new collaborators. This show is dedicated to immigrants and is a celebration of the sacrifices they made for this country to be able to grow, both economically and democratically. Based on historical events.

Canada, as great a country as it is, does have some shameful events regarding refugees in its past like turning away Jewish refugees and Japanese internment camps in World War Two. This is something I had never heard of before, the internment of Serbian and Ukrainian immigrants, known as "enemy aliens" in the First World War. From 1914 to 1920, Canada interned 8,579 enemy aliens in 24 receiving stations and internment camps. They cleared forests for parks, including Banff National Park. 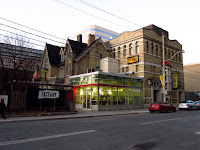 Little is known about this but was heavily researched by Mladen Obradovic, who wrote and plays Nebojsa in this production

The play revolves around a group of workers clearing a forest. One now hates Canada because of what had happened and another, Janko, is in love with a young woman, Claire, he met before being arrested and interned for the remainder of the war for incorrect paperwork. The three men and the family they are friends with lead a hard life in the forest.

I thought Dewy Stewart, who played Janko, was excellent as was Mila Jokic, as the hopelessly romantic and optimistic daughter of the family, Olessya.

Too bad the play is not running longer. There was a large crowd for this performance and it is a well-acted and produced play, plus a story worth telling.