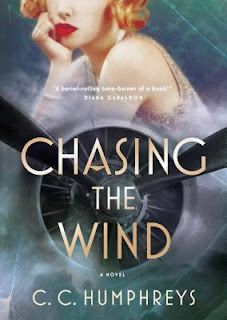 I just finished reading Chasing the Wind by C.C. Humphreys

That's what Roxy Loewen always thought, until she falls for fellow pilot Jocco Zomack as they run guns into Ethiopia. Jocco may be a godless commie, but his father is a leading art dealer and he's found the original of Bruegel's famous painting, the Fall of Icarus. The trouble is, it's in Spain, a country slipping fast into civil war. The money's better than good--if Roxy can just get the painting to Berlin and back out again before Reichsmarshall Hermann Goring and his Nazi pals get their hands on it . . .

But this is 1936, and Hitler's Olympics are in full swing. Not only that, but Goring has teamed up with Roxy's greatest enemy: Sydney Munroe, an American billionaire responsible for the death of her beloved dad seven years before. When the Nazis steal the painting, Roxy and Jocco decide that they are just going to have to steal it back.

I have read a few of C.C. Humphrey's books in the past including all 3 books in the Jack Absolute series and Fire. A couple of more on my on reading list.

The story of Roxy Loewen's is quite the ride. I really enjoyed the writing style and the way the book never went in the direction I figured it would. It was obvious this book was heavily researched by Mr. Humphreys and his Author's Notes at the end  proves this. In fact I enjoyed the Authors Notes as much as I enjoyed the book.

Chasing the Wind is a wild ride worth reading.

Chris (C.C.) Humphreys was born in Toronto, lived till he was seven in Los Angeles, then grew up in the UK. All four grandparents were actors, and since his father was an actor as well, it was inevitable he would follow the bloodline. Chris has performed on stages from London's West End to Hollywood.

A playwright, fight choreographer and novelist, he has written eleven adult novels including 'The French Executioner', runner up for the CWA Steel Dagger for Thrillers; 'The Jack Absolute Trilogy'; 'A Place Called Armageddon'; 'Shakespeare's Rebel' and the international bestseller, 'Vlad - The Last Confession'.

His recent novel 'Plague' won Canada's Arthur Ellis Award for Best Crime Novel in 2015. The sequel, 'Fire' is a thriller set during the Great Fire, published Summer 2016. Both novels spent five weeks in the top ten on 2016's Globe and Mail and Toronto Star Bestseller lists. He is translated into thirteen languages. In 2015 he earned his Masters in Fine Arts (Creative Writing) from the University of British Columbia.

Chris now lives on Salt Spring Island, BC, Canada, with his wife, son and cat, Dickon (who keeps making it into his books!).
Posted by Swordsman at 13:46