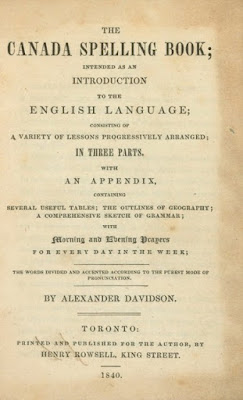 Today in 1840, Alexander Davidson published the first Canadian copyrighted book, The Canada Spelling Book. Davidson did not like the amount of use American textbooks had in Canadian schools and in 1828 he commented that nine out of every ten books came from the United States.

That same year in a note to George Hillier, the civil secretary at York, he wrote “for several years past no English Books could be procured . . . so that I am led to believe that the supply from England is precarious, and not at all equal to the growing demands of the Province.” His note continued that "unless some proper elementary books be got into general circulation, common school education will continue to be little better than a mere farce, and an useless expenditure of public money.”

He also thought that spelling-books from England were “to us necessarily defective, not being suited to our scenery and other localities.” The lessons in his speller were illustrated by references to Canadian places, and the necessary connection between religion and education was maintained by ensuring that each reading lesson would “subserve the interests of religion and morality.” It was common for spellers of the day to provide moral lessons. 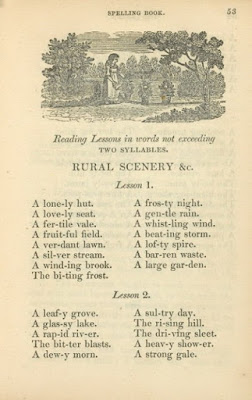 Davidson passed away on 23 Feb. 1856 at the American Hotel in St Catharines at the age of 62. The St. Catharines Journal wrote in his obituary that “He was a man of superior talent, as many articles of his plainly demonstrated: could grapple with most subjects, and evinced an acute and logical mind in their treatment.” 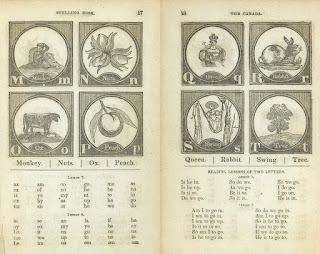