Today in 1849, after telegraph lines are completed in Halifax which connected Europe, the US and Newfoundland, the first telegraph office there opened for service. This brought about an end to the Nova Scotia Pony Express.

The Pony Express only missed only one ride from it's first one from Halifax to Saint John on February 21, 1849 (about 27 hours) till it's last ride which left Halifax at dusk on November 8, 1849 and arrived the next Morning in Sackville 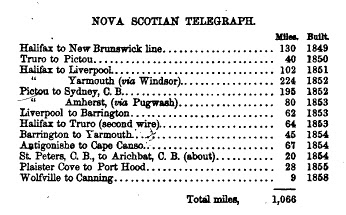