Book Review - The Pluto Files: The Rise and Fall of America's Favorite Planet 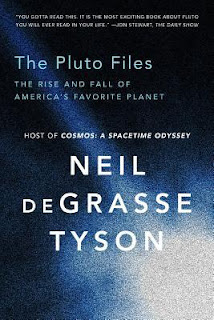 A year or so ago I went to a lecture by Neil deGrasse Tyson, an Astrophysicist who when he lectures is as entertaining and humorous as he is informative. At times during his talk, when the subject of Pluto came up, there would be some booing in the crowd.

He was part of the decision to reclassify Pluto and remove it's status as a planet. Actually he might be considered the catalyst of bringing the issue of Pluto being a planet to a head.

When I saw that he had written a book The Pluto Files about the discovery of Pluto and the decision making process to "downgrade" the planet from the nine we currently know of, I had to read it.

When the Rose Center for Earth and Space at the American Museum of Natural History reclassified Pluto as an icy comet, the New York Times proclaimed on page one, "Pluto Not a Planet? Only in New York." Immediately, the public, professionals, and press were choosing sides over Pluto's planethood. Pluto is entrenched in our cultural and emotional view of the cosmos, and Neil deGrasse Tyson, award-winning author and director of the Rose Center, is on a quest to discover why. He stood at the heart of the controversy over Pluto's demotion, and consequently Plutophiles have freely shared their opinions with him, including endless hate mail from third-graders. With his inimitable wit, Tyson delivers a minihistory of planets, describes the oversized characters of the people who study them, and recounts how America's favorite planet was ousted from the cosmic hub.

The book is so well done. It could have been a very dry read but with deGrasse's humour and writing style, it comes off as anything but. Not only does he write about Pluto, he also covers the other planets and how they can be classified, and even has Pluto cartoons scattered throughout.

In reading The Pluto Files I learned so much about Pluto, our solar system and was highly entertained in doing it. I highly recommend it.

Note: After reading The Pluto Files I still and always will consider it a planet!
Posted by Swordsman at 13:58