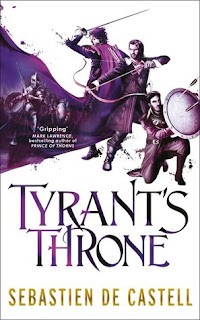 This morning I finished the fourth and final book of the Greatcoat Series, Tyrant's Throne.

After years of struggle and sacrifice, Falcio val Mond, First Cantor of the Greatcoats, is on the brink of fulfilling his dead King's dream: Aline, the King's daughter, is about to take the throne and restore the rule of law once and for all.

But for the Greatcoats, nothing is ever that simple. In the neighbouring country of Avares, an enigmatic new warlord is uniting the barbarian armies which have long plagued Tristia's borders - and even worse, he is rumoured to have a new ally: Trin, who's twice tried to kill Aline to take the throne for herself. With the armies of Avares at her back, she'll be unstoppable.

Falcio, Kest and Brasti race north to stop her, but in those cold and treacherous climes they discover something altogether different, and far more dangerous: a new player is planning to take the throne of Tristia, and the Greatcoats, for all their skill, may not be able to stop him.

As the nobles of Tristia and even the Greatcoats themselves fight over who should rule, the Warlord of Avares threatens to invade. It is going to fall to Falcio to render the one verdict he cannot bring himself to decide: does he crown the girl he vowed to put on the throne, or uphold the laws he swore to serve?

The entire series was excellent. The author, Sebastien De Castell, can really tell a great story.

All the books are written in first person by First Cantor of the Greatcoats, Falcio val Mond, whose companions, master swordsman Kest and archer Brasti, both too are Greatcoats, accompany him throughout all the books. I really enjoyed the banter and friendship the three shared .

The series, a fantasy that has been compared to the Three Musketeers (both De Castell and Dumas should be flattered), is the story of the breakdown of the country of Tristia after the murder of its king, Paelis, and Falcio, Kest and Brasti's attempts to fulfill the final order given to them by the king before his death while also saving the country and its people.

Tyrant's Throne takes Falcio and the others around the country in an effort to put Aline, the daughter King Paelis, on the throne without creating a civil war in the process. It seems the Dukes of the various Duchy's are quite devious and power hungry. Falcio, as usual, takes a physical and mental beating in the process.

The book is fast-paced, full of adventure and intrigue and a great read. It neatly ties up all the loose ends for the book and series in the last few chapters.

I am sad that the book and series are finished but happy that the author did not fall to temptation to expand it to many more books which may have watered down the story, series and characters.

So long, Flacio, Kest, Brasti! I'm glad we had a chance to get together. 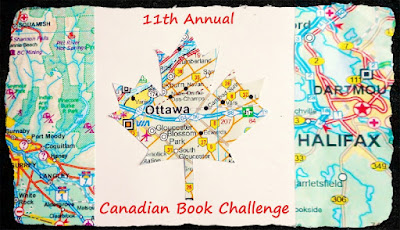 Found you via the Canadian Challenge linkup - this sounds amazing! I've added the entire series to my TBR list, though I don't know when I'll have time for such a hefty set. Someday, when I get a hankering for some epic fantasy again, I'll have to dive into it. :)