Book Review - The Ward, The Life and Loss of Toronto's Immigrant Neighborhood 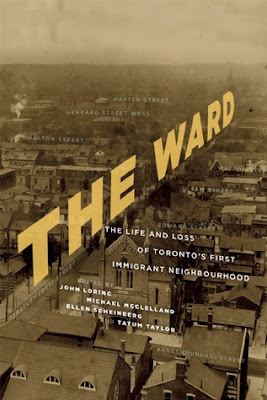 Recently I had to go into the hospital and my friends knowing that I am not only a history buff but also a Toronto history buff, gave me The Ward as a present to read during my stay.

From the 1840s until the Second World War, waves of newcomers who migrated to Toronto – Irish, Jewish, Italian, African American and Chinese, among others – landed in ‘The Ward.’ Crammed with rundown housing and immigrant-owned businesses, this area, bordered by College and Queen, University and Yonge streets, was home to bootleggers, Chinese bachelors, workers from the nearby Eaton’s garment factories and hard-working peddlers. But the City considered it a slum, and bulldozed the area in the late 1950s to make way for a new civic square.

The Ward finally tells the diverse stories of this extraordinary and resilient neighbourhood through archival photos and contributions from a wide array of voices, including historians, politicians, architects, story­­tellers, journalists and descendants of Ward residents. Their perspectives on playgrounds, tuberculosis, sex workers, newsies and even bathing bring The Ward to life and, in the process, raise important questions about how contemporary cities handle immigration, poverty and the geography of difference.

This book is uniquely done. It is a study of the what was known as The Ward, located in the area mentioned above. There are over 60 stories and and essays in the book that were written, today and earlier looking back at the area and so many articles that were written at that time.

The Ward is also full of pictures that look at the Ward from all angles, work, play and the awful living conditions of the area. It talks about the mixture of people, many newly landed immigrants, that found themselves living in the area together. Also told very well are the stories on how these people were viewed by the middle and upper class  citizens of Toronto. It was a very racist view.

I really enjoyed The Ward and would highly recommend it. Thanks, guys!

Here is my favorite picture from the book circa 1930. 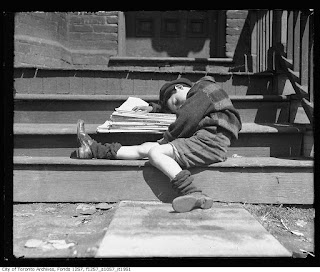 This sounds really fascinating - as someone who did Canadian History & Lit in university, I love these microhistories of Canadian places. Glad you had something good to read while in hospital, and hope you're feeling better!