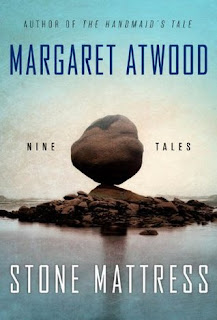 Although I don't read them often, and I have no reason to offer as to why i don't, I do enjoy a good short story. Short stories are one of many of Margaret Atwood's strengths and I have just finished her collection:  Stone Mattress: Nine Tales, published in 2014. The book is named after one one the story's in the boom, which also was one of my favorites.

Margaret Atwood turns to short fiction for the first time since her 2006 collection Moral Disorder, with nine tales of acute psychological insight and turbulent relationships bringing to mind her award-winning 1996 novel, Alias Grace.

A recently widowed fantasy writer is guided through a stormy winter evening by the voice of her late husband in "Alphinland," the first of three loosely linked stories about the romantic geometries of a group of writers and artists. In "The Freeze-Dried Bridegroom," a man who bids on an auctioned storage space has a surprise. In "Lusus Naturae," a woman born with a genetic abnormality is mistaken for a vampire. In "Torching the Dusties," an elderly lady with Charles Bonnet syndrome comes to terms with the little people she keeps seeing, while a newly formed populist group gathers to burn down her retirement residence. And in "Stone Mattress," a long-ago crime is avenged in the Arctic. In these nine tales, Margaret Atwood is at the top of her darkly humorous and seriously playful game.

The stories in the book are told in present tense and many are told from the perspective of a senior looking back on a life altering moment of their past life, and how they may be able to correct or at least make peace with or avenge it, at that particular moment of time.

I have already said that Stone Mattress was one of my favorite tales told in the book. Some didn't work for me, which will happen in collections. My other favorites (in no particular order) were: the first tale, Alphinland, The Freeze Dried Groom and Torching the Dusties. (I had to look up Charles Bonnet's Syndrome when it was mentioned on the second page of the story to be able to understand what was happening).

When I first started The Dead Hand Loves You, I wasn't really enjoying it. Then as the tale of both the real story of the author and the story of the hand that he had written became more complex, I found them both to be very compelling.

I thoroughly enjoyed reading Stone Mattress.
Posted by Swordsman at 20:45