"Weaving Canada’s Story: Ideas, People and Objects" at the International Festival of Authors 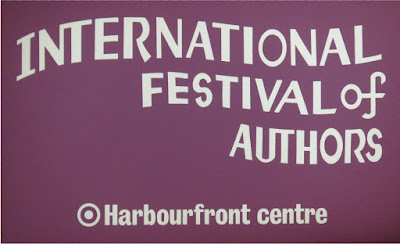 Claire Cameron was the host for tonight. She opened by acknowledging the indigenous people of the GTA, then paid tribute to jailed writer Azimjon Askarov, honoured by an empty chair, whom I wrote about last night. 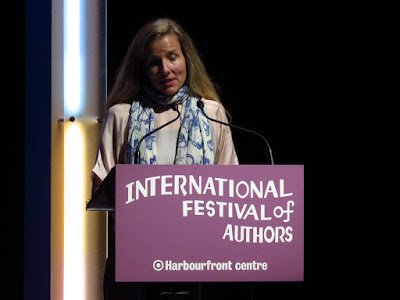 Charlotte Gray, who in 2007 became a Member of the Order of Canada according to the program, was to read from her just published book, The Promise of Canada.

What does it mean to be a Canadian? What great ideas have changed our country? An award-winning writer casts her eye over 150 years of Canadian history.

“Our country owes its success not to some imagined tribal singularity but to the fact that, although its thirty-five million citizens do not look, speak or pray alike, we have learned to share this land and for the most part live in neighbourly sympathy.” —Charlotte Gray, from the Preface of The Promise of Canada.

Instead she said she was instead, going to talk about what keeps Canada together and do we have an identity. She joked that she wanted to do this instead of reading from her book so when we buy it, every word will be fresh and new to us. 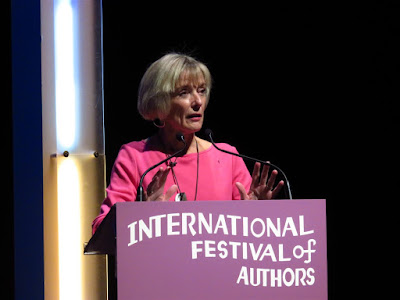 Reading from A Number of Things: Stories About Canada Told Through 50 Objects which was published this month, was Jane Urquhart, who in 2005 was named an Officer of the Order of Canada.

Jane Urquhart chooses 50 Canadian objects and weaves a rich and surprising narrative that speaks to our collective experience as a nation. 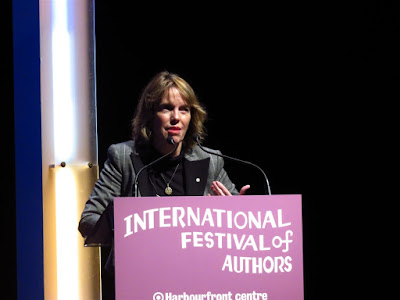 Instead of an interview afterwards, Charlotte and Jane had a discussion about what Canada is and the different approaches of writing about it from a non-fiction view to a fictional one. A Number of Things was Jane's first non-fiction book.

The two of them are good friends and we were told when they first sat down that we were not hearing a new discussion but instead coming into the middle of one which has been going on for months.

At one point tonight, when I first arrived home from work, I debated about going, even though I had a ticket. I've been hit with a cold and it would not have taken much for me to curl up on the couch and fall asleep watching the ball game.

I'm glad I decided to suck it up and go. Both ladies had a great sense of humour and are quite passionate on the subject of Canada and how we view its history. It was a thoroughly enjoyable evening.
Posted by Swordsman at 23:47