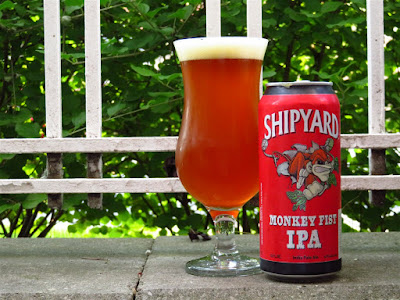 When Teena was out east a couple of weeks ago, she came back with a couple of cans of Monkey Fist IPA from Portland, Maine's,  Shipyard Brewing.

The owners of Shipyard Brewing brewed their first beers in 1992 off site in Kennebunkport Harbor, which is about 40 minutes south of Portland, at Federal Jack’s Brew Pub (Federal Jacks is still around). Two years later they opened their own bricks and mortar brewery in Portland.

Their logo is based on a schooner which was built where the brewery now stands back in the early 1800s.

What is a monkey fist? Is it a clever funny name for an IPA or a real thing? It's a knot that is made at the end of a rope to add weight in order for the rope to be thrown with great accuracy over a longer distance. 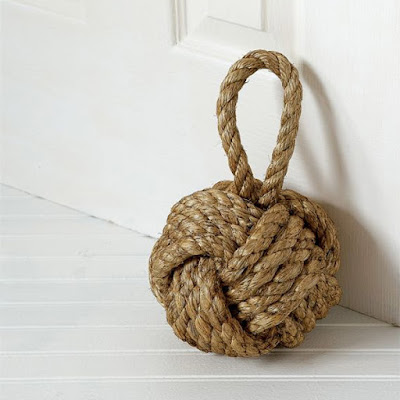 Most of the time when I try an IPA from the U.S., I expect a west coast-style ale, citrusy and bitter, a style I love. Monkey Fist is not like this at all. Instead it's a true English style IPA, one that I don't have enough.

It pours amber in colour, with a slightly off white head. Piney hops dominate the aroma. At first, when I sipped, there was very little taste, just watery in mouth feel, but this lasts for just a moment before a lovely piney hop bite comes through. They don't overpower you and leaves my mouth with a nice piney bitter finish.