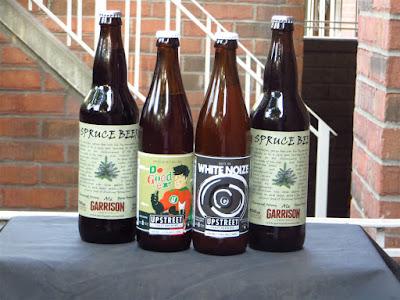 Teena had another work trip down east last week and when she came back home, she had some more beer for me.

While on a short layover at Halifax airport, she pick me up two bottles of Spruce Beer from Garrison Brewing at Liquid Assets. It's a beer I haven't had since 2012 and am so looking forward to it.

Originally I had thought that the small island province of P.E.I. only had two craft beer breweries, PEI Brewing and Gahan House, but Teena found a third, Upstreet Craft Brewing, located in Charlottetown. Of course, she came back with two brews from them.